November 24, 2015 Leave a comment
“With a knick knack paddy whack,
Give Pengu a bone.
This Kalu’ak came rolling home!”

Sorry about that. My brain’s a little fried tonight. Here’s a fantastic tuskarr cosplay to take your mind off my terrible songwriting. 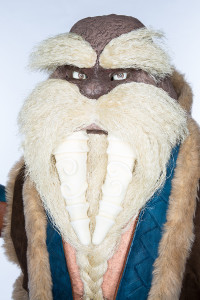 Dragonblight, and the end is in sight. Well, not really, since once you’re done, you’ll have to do dailies until you’re exalted, but at least the non-repeatable quests are nearly done. All the Dragonblight quests require level 71, which you should be if you were crazy enough to start the quests at 68, instead of higher, like most bored collectors do.

This is the hub for the Kalu’ak in Dragonblight. You might as well start with Elder Ko’nani, since you probably have the quest Travel to Moa’ki Harbor from Borean Tundra (and part 1 of the guide). He’s inside the building next to the flight point. Grab Let Nothing Go To Waste, and then go outside to Trapper Mau’i and pick up Planning for the Future. This also happens to be the daily quest for Dragonblight.

Head north of Moa’ki and gather the pups, killing the wolvar around them for the stolen supplies. Once you turn those in, you’ll get one last quest from Elder Ko’nani, to kill the head wolvar. Once you do that and turn in, more quests open up.

Tua’kea needs crab traps. While you’re out there, you’ll see a wrecked crab trap. It gives you the quest Signs of Big Watery Trouble. You might as well pick it up at the same time as the other traps. Once you turn it into Tua’kea, he sends you off on two more quests for some revenge.

Toalu’u the Mystic has a series of quests for you: {link11}, fly about Moa’ki and the surrounding area in spirit form, {link12}, commune with an Elder, {link13}, lay spirits to rest, and {link14}, commune with a sea goddess. It’s a bit of traveling, but it will bring you back to Moa’ki at the end.

At this point, you’ve reached the end of the questlines that reward rep for the Kalu’ak, including the dailies. Provided you’ve done all the quests up to this point, you should be revered.

So, how long will it take for you to get to exalted, and make Pengu yours?

This is based the rep gained from all three quests (1500 total), not counting any bonus to reputation, like the human racial, or the Darkmoon Faire. If you have a 10% bonus of any kind (such as humans do), you can knock a day off.

And that’s it for the Kalu’ak. If you have any feedback for me, please contact me through the forums. I’d love to hear what you think of this guide, or hear what rep you’d like me to tackle next!