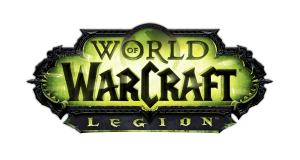 Hi, everyone! This panel was full of so much information! We have an introduction to the expansion, an intro to Demon Hunters, a tour of all the new zones in the Broken Isles and, finally, a look at what the gameplay and end content will be like in Legion! I am so excited for this expansion, I can’t stand it! I will do my best to give you the highlights of what was covered, and not overwhelm you with too many little details.

Mr. Afrasiabi gave a very brief intro to the expansion. Legion is actually the third time the Burning Legion has invaded Azeroth. Brief backstory leading up to the Cinematic for Legion:

This is the first time that a cinematic was created to tie directly into the main story of the game.

The Broken Shores is the springboard for the plot and gets everyone up to speed and on the same page in terms of the storyline. It is ground zero for the Legion Invasion. This will consist of a 40-person scenario, which is unique in that it is made up of 20 Horde and 20 Alliance fighting side by side as they struggle to take the shores.

Mr. Maloof was tasked with giving us all a sneak peak at DEMON HUNTERS! 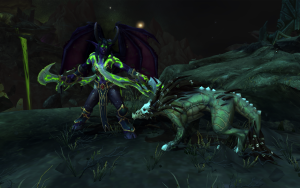 As a Demon Hunter you will

In addition to all kinds of powerful demons (some more powerful versions of what we’ve seen before, and some brand new ones), you will also have to deal with their terrible constructs, which are soul-infused buildings/machines. Clearly the Burning Legion isn’t fooling around this time.

How does a Demon Hunter fight?

Finally, they get their own special mount: the Felsaber, created especially for them by Illlidan Stormrage himself.

At this point you are sent back to the Black Temple just in time to be captured by those raiding the temple and are imprisoned at the Vault of the Wardens. Thus ends only the first half of your start as a Demon Hunter!

The second half begins some years later. The Burning Legion is invading, and Azeroth is losing. In this second half you must

You are now a full-fledged Demon Hunter!

The next part of the panel covered all of the new zones in this new continent of The Broken Isles. 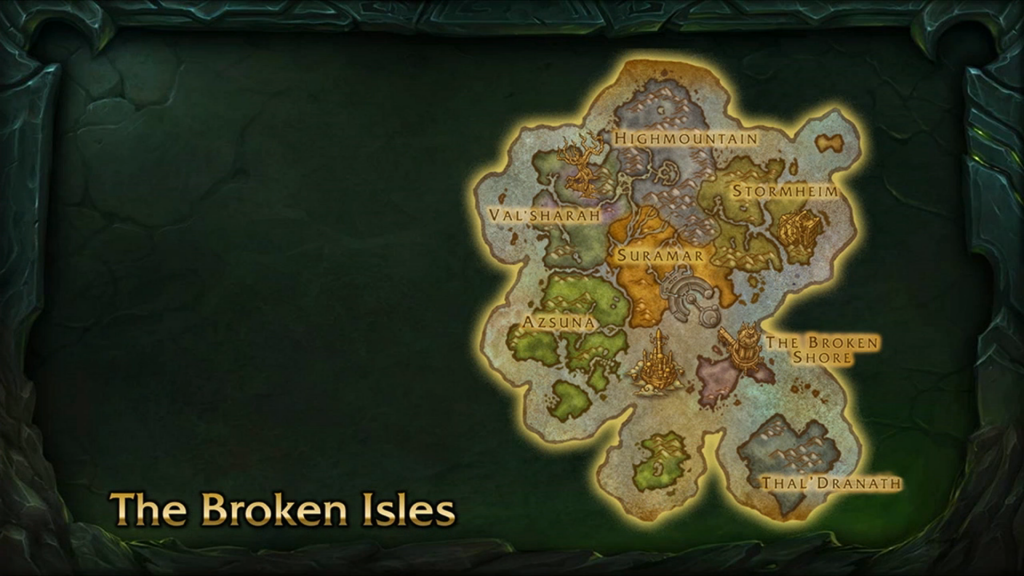 Here Messrs. Morris and Platner give us a brief overview of each section and what you might encounter.
The Broken Isles has six distinct areas that we will be exploring. The purpose of our exploration is to find the Pillars of Creation, used by the Titans to shape Azeroth, and required to close the demon portal. 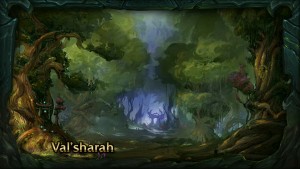 Sadly, the Emerald Nightmare is creeping in. This area is on the West Coast of the Broken Isles, and is home to Shaladrassil, a once majestic World Tree that is now twisted and corrupt. It is here that Malfurion met Cenarius.

We will encounter many druids and archdruids here, as well as Nightmare Dragons, formerly of the green dragonflight. Val’sharah is also home to Black Rook Hold. We also got a sneak peek at some new druid models (moonkin and swimming form got some nice upgrades). 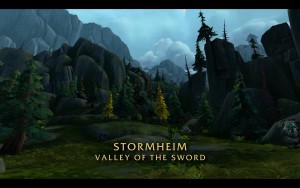 Next up: Stormheim, a dangerous, trecherous land, home to the Vrykul.

It is on the East Cost, and it is here that we will encounter, and fight, the God King, Skovald. We will also learn about the origins of the Kvaldir and Valkyr. It is home to two new dungeons: Helheim and Halls of Vallah.

We will also meet a new, fledgling, dragonflight: the Stormdragons. 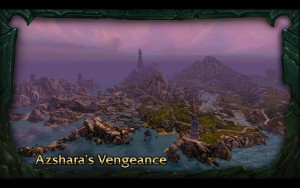 A quick tidbit of information was interjected here as well: in Legion, we will be able to see up to three times farther than what we can now. Super cool! 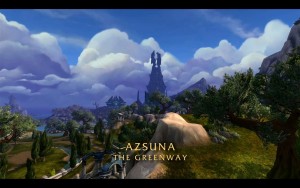 Azsuna, a serene island paradise that is now cursed and haunted is next.

It is in the southwestern part of the Broken Isles, and is under attack from a naga force sent by Queen Azshara, who has allied herself with some pretty scary Sea Giants. These guys are so big they use ships for shoulder armor — that should tell you something!

Azsuna is home to the remnants of the blue dragonflight. We’ll also encounter what they ‘lovingly’ called “Manshees”, male banshees, whose actual names are “Specters”. Azsuna will have the feel of a Greek Isle. Also in Azsuna, but as its own separate land mass, is the Warden’s Isle, home to the Vault of the Wardens (…remember? where the Demon Hunters escaped from?) 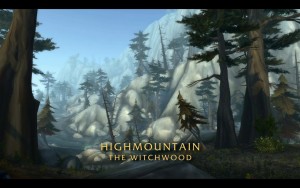 After Azsuna we moved on to Highmountain.

This is one of the largest mountain peaks in all of Azeroth. It is located in the far north of the Broken Isles, and is home to three ancient Tauren clans: Rivermane, Skyhorn, and Bloodtotem. These tauren are direct descendants of the tauren that fought in the War of the Ancients. 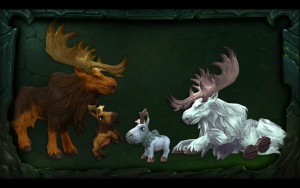 Also found here are the shamanistic Drogbar, who were once enslaved to Neltharion the dragon (aka Deathwing). These drogbar have fractured the unity between the three tauren clans by stealing a precious artifact.

We will also encounter Alpine Harpies and Ettin, both of which will be larger and more aggressive than what we’re used to. Also, a sneak peak at some wildlife: Moose! and BABY moose! Yay! 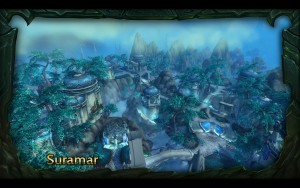 Finally, the last area covered is Suramar, which is the ultimate end zone.

It is an elven metropolis. A race of nightelves called “Nightborne” live here. The nightborne created a shield bubble a long time ago to save the city, but have since become dependant on the arcane energies flowing from the Nightwell, which shrouds the city in eternal darkness.

They also have formed a pact with Gul’dan. Oh goody. This city is one of the most ambitious that they have done, and you will be able to explore every inch of it! It was still a work in progress, so we didn’t get to see much of it.

The last zone in the Broken Isles, Thal’Dranath, wasn’t even covered. They said it was still very much in progress, and will be similar to Tanaan Jungle in Warlords of Draenor.

And now time for Ion Hazzikostas to tell us about the really exciting stuff! Gameplay!

So, what order do we go through the zones as we’re leveling? Are you ready? Any order we want to! All of the zones scale, so you can start in whichever one you want to, and the mobs and loot will be appropriate. You can thank the flexible raids, timewalking dungeons, and the proving grounds for laying the groundwork that is making this amazing thing possible. 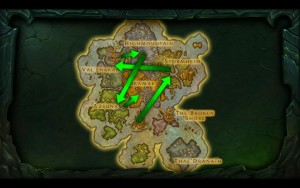 There are four zones you can choose from to level up in: Suramar is max level (110) content only, so you will always end up there last.

Each zone has a Pillar of Creation, which is your objective to obtain. So even though you get to choose your own path, you still have to visit all four zones at some point.

In order for you to pick your own path, the world is scaled based on you, not you based on the world. Your artifact weapon will help you stay ahead of the curve. Also, there will be some non-scaling foes that you will only be able to beat at max level, so you still have to stay on your toes (think Fel Reaver).

What happens at max level? What’s the end-game stuff like?

They want to take the best of both worlds into Legion (the daily storyline system from Mists and the pick-your-own daily type thing from Draenor). Because the zones are flexible, we’ll be making use of the entire world even after hitting max level.

We’ll have outdoor world quests, different zones, different rewards, different durations of availability. They want to overwhelm us with choices, and I think they have:

There will definitely be plenty to choose from. 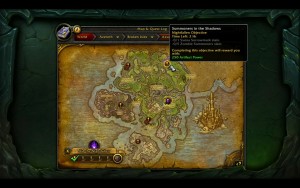 There will also be quests given out in your Class Order Halls by emissaries from different factions. 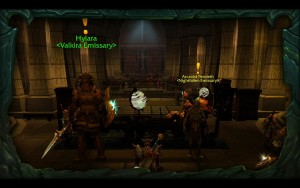 These quests will be similar to Hearthstone quests; if you miss a day, they’ll still be waiting for you the next time you log in. However, the emissaries could “get bored and eventually leave” if you don’t get to their quests within a few days.

At least there will be no pressure to have to log in every day to make sure you don’t miss out on any ‘daily’ quests.

There will be two new raids released with the expansion: The Emerald Nightmare and The Palace of Suramar. 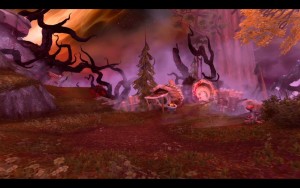 The Emerald Nightmare will be a 7-boss raid in Val’sharah.

Some of the bosses in this encounter are the Pestilence Worm (apparently the game team missed having dragons, since there are no dragons in Draenor, so boss #1 had to be a dragon); Cenarius, say what?; and Xavius. 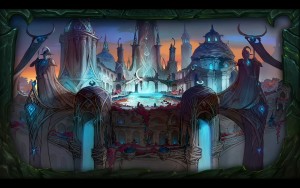 The Palace of Suramar is a 10-boss raid, and holds the final Pillar of Creation: the Eye of Aman’thul.

This is Gul’dan’s base of operations, but isn’t going to be dark and demon-y because it is the majestic center of the Nightborne elven civilization. It will be an open sprawling space.

Some of the bosses we will see include Dreadlord Ambassador, Grand Magistrix of the Nightborne, and Gul’dan, who will be the final boss of the encounter.

The 5 level-up dungeons are:

These dungeons will be integrated into the storylines of their particular zones, with the dungeon being the ‘end’ of the zone. And as with the leveling zones, these dungeons can be done in any order.

The 5 max-level dungeons are: 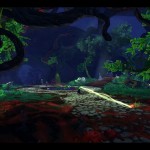 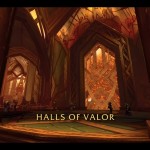 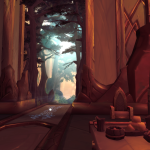 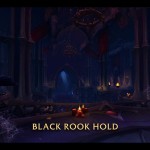 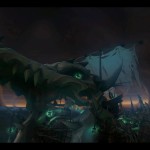 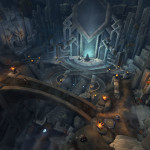 The goals for the dungeons in Legion were that dungeons

One final thing they discussed for dungeons is a slight revamp of the way Challenge Mode dungeons will work in Legion. 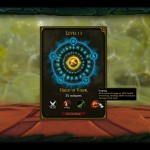 Challenge modes will have a “Challenger’s Keystone”, which points to a random dungeon. It has a particular power level which determines the difficulty and reward of that dungeon, and also may have additional modifiers on it that determine additional aspects of the dungeon.

The dungeons will scale up, rather than the player being scaled down. They want there to be a focus on the gameplay, not just rushing through the dungeon trying to get done. There will always be progression, another step on the ladder.

There will be new modifiers to master each week. Some examples of the modifiers were:

Rewards from completing these challenge mode dungeons include:

These dungeons are meant as a genuine alternate path to raiding.
“There will be something that breaks you…” ~Ion Hazzikostas. But the rewards will be awesome.

Also, there was a quick note at the end of the presentation about making sure you’re opted in for Beta testing if you’re interested in that sort of thing, as they typically begin closed betas within a few weeks after Blizzcon. So all that being said…

Be sure to check out more information from Blizzcon 2015 here:

And the rest of Azeroth Adoption Agency’s coverage of Blizzcon 2015 here: