One look at this small, grinchy menace in a Santa suit, and you may rethink including him in your pet battle lineup – but don’t be too hasty! Today we are going to get in the festive mood, and take a look at the Rotten Little Helper! You can acquire this nasty little creature during the Feast of Winter Veil. He drops from the Stolen Present gained from the Christmas daily You’re a Mean One… (H)/You’re a Mean One… (A). He also has a chance to drop from the Christmas presents in Orgrimmar and Stormwind. 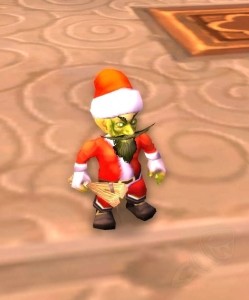 His scowl, and the board with a nail sticking out of it that he wields, make him a little off-putting at first. However, over the last several weeks he’s really grown on me. Perhaps it is because he reminds me of Dr. Seuss’ Grinch, and how we love to watch that movie every year, but he actually has a few funny animations as well.

Much like the other Helper pets, he despawns quickly after you summon him if it isn’t Winter Veil. He does the /rude animation at you before disappearing. If it is during Winter Veil, you can hear him saying the following sayings if you click on him:

So, let’s talk stats and abilities. 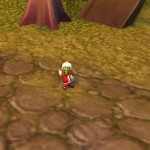 The Rotten Little Helper comes in the P/P breed only, with 1359/333/260. The 333 power makes this little grump a very heavy hitter. In the first slot, you have a choice of Club or Ice Lance, which both do a nice amount of damage. In the second slot, you have a choice of Booby-Trapped Presents or Ice Tomb. Personally, I really enjoy using Booby-Trapped Presents, especially against beasts. However, the only drawback is that you have to make sure to use it against an enemy pet that goes first or second, I made that mistake once without even thinking about it, so perhaps it just takes a little extra planning to account for in your lineup.

However, Booby-Trapped Presents can do 706 damage, so I think it is definitely worth it! Call Blizzard, in the third slot, pairs nicely with Ice Lance to add extra damage. Greench’s Gift is a very heavy hitter, and I also prefer to use this ability. Of course, it depends on what type of pet you are fighting, but I really enjoy using the Rotten Little Helper to knock out beasts quickly!

All in all, the Rotten Little Helper is a solid pet, and definitely one to make sure you attempt to get to drop as you are completing your Feast of Winter Veil quests!