Repping with Leashes – The Sporeggar

The Sporeggar: curious fungus-like humanoids that live out in Zangarmarsh in Outland. Has anyone else wondered why there’s no one like this in Draenor? Maybe they developed after the world split up, but still, it’s not like Garrosh and Kairoz went thousands of years back in time. 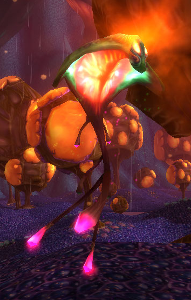 I’m getting off topic. The point? The Sporeggar have a pet. A tiny sporebat pet. You can get it only if you’re Exalted with them. Thankfully that’s easy enough to obtain if you follow my guide.

You can do this easily with one character, if they’re at least level 80. Bonus points if they’re an herbalist, but it’s not necessary. If you’re lower than that, and cannot solo the Underbog in Zangarmarsh, then it will take you a little longer.

Unlike the Kalu’ak guide, which covered zones, this guide is split up by reputation. Not all the quests are available at all reputation levels, so just head to the reputation level you’re at, and go from there.

First, go to the Spawning Glen in Zangarmarsh. It’s in the southwest corner of the zone, just north of Nagrand. As you get close, you’ll see yells from Fahssn, such as, “The bog lords are attacking! Help us!” Stop by, and pick up Natural Enemies and The Sporelings’ Plight. 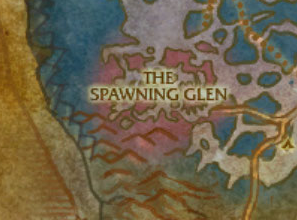 For some reason, you start about 500 rep into Unfriendly when you start this. The two quests give you 750 rep each (1500 total), and you get 15 rep for each fungal giant you kill. I found it takes about ten kills to get six tendrils, so that’s another 150 rep.

These quests are repeatable until you hit Friendly, and you don’t need to be on them to get the Mature Spore Sac or Bog Lord Tendrils. While you’re out running around, pick up 30 spore sacs, and 18 tendrils. That’s enough for three more turn ins of each.

Once you’ve done that, turn in your quests, picking up Sporeggar when you hit Neutral. Keep turning in the tendrils and sacs until you’re less than 750 from Friendly. It should take all six turn-ins.

At this point, you need to do one of these quests one more time. It doesn’t matter which you do, as long as you don’t hit Friendly before turn in. You can collect 10 spore sacs, or 6 bog lord tendrils, but keep an eye on your reputation bar. You want to be as close to 3000 without going over that you can be. If you were collecting spore sacs, that means grinding on bog lords until you’re almost at 3000. That also means that if the bog lords aren’t dropping tendrils for you, you might have to quit killing them with 4-6 collected, and go for spore sacs.

Sporeggar
Once you’re friendly, Fahssn is done with you. You’ll have the quest Sporeggar if you came from the previous section, so head there. You’ll turn in the quest to Msshi’fn, who might try to send you on a quest called Glowcap Mushrooms, before telling you you’re not eligible. Don’t sweat it; it’s not necessary to getting rep. It just has you run all over collecting mushrooms, which isn’t very efficient.

There are two quests here that you can pick up and do if you want, but they’re also not that efficient. They’re Now That We’re Friends and Fertile Spores. The first requires you to kill 18 naga, and the second requires fertile spores from spore walkers and spore bats. I suggest you skip them, and go to the Underbog.

The Underbog
It’s not a fun place, but as long as you’re level 80 or higher, you can solo this just fine. Once inside, you’ll see T’shu inside, with the quest Bring me a Shrubbery! He wants 5 Sanguine Hibiscus, which are scattered all over the instance as plants, or on the mobs you kill. This is where herbalists have an advantage, as they will show up with Find Herbs. Once you turn the quest in, it becomes the repeatable Bring Me Another Shrubbery! 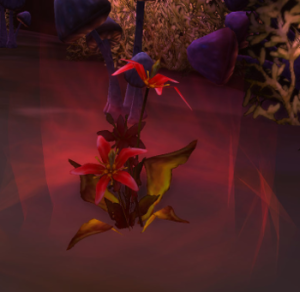 Sanguine hibiscus are tradable, and buyable on the auction house, so if you want to potentially save time, you can check for them there.

Solo the instance, killing everything. Scour the corners of the instance. The hibiscus usually spawn in the corners and other odd places, like behind the ramp leading up to the first boss, and a peninsula before the last boss.

If you’re roughly 1000 into Friendly, you’re going to need seven turn-ins, or 35 hibiscus, to get to Honored. In total, you’ll need about 255 of them, or 51 turn-ins’ worth, not counting any rep bonuses.

Congrats, you’ve made it past Friendly! Guess what? I see more hibiscus in your future! It will be 16 turn-ins (80 hibiscus) to hit Revered, and 28 turn-ins to hit Exalted (140 hibiscus).

Tired of running the Underbog and want a change? You can always go and do Now That We’re Friends and Fertile Spores to mix things up. They’re not as efficient, but will break up the monotony.

You can also kill Marsh Dredgers and Lurkers in a cave in the extreme southeast of the zone. Each of them gives 15 reputation, and if you’re 80 or higher, they’ll be a quick kill. Also most people don’t bother completing all the Zangarmarsh quests, so competition is low. You’ll need to kill about 50 of them to equal one turn-in of hibiscus, but it’s an option.

If you’re patient, and have a bit of luck with the hibiscus drops (or the auction house), you can get to Exalted in a day. If you average 25 hibiscus every run through the Underbog, you need only ten runs, plus a few, to get to Exalted. If you can complete two runs an hour, then you can have the entire thing done in about 6 hours.