You’ve got your list of pets that will help you on your way to fame and glory in pet battling, and you’re set to go, except: why are any of these pets any good? I mean, really… what is so special about them that they’re even recommended?

Over the next few Tamer Tips we’re going to be looking at just what it is that does make these guys so great. Each episode will focus on one particular aspect, until you not only understand why these guys were recommended, but also how to tell if that shiny new pet you picked up off the auction house, or had drop off a boss, is any good for your teams. 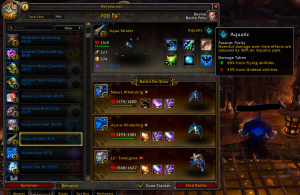 This is a fairly important mechanic to learn. All damage has an average amount it deals, and is generally given in a range. If you can counter a pet, it means you could deal more damage to the opposing pet, take less damage from it, and some pets are even good at both.

The Aqua Strider in this image is weak against any Flying attacks, and strong against any Undead attacks. Putting him against a moth that will keep pecking you is a bad idea because you take far more damage. But that Ghostly Skull that’s being annoying, he’s perfect for that battle because you take less damage. This is what is called a soft counter.

The damage you take isn’t the only thing, though. You also need to consider what damage you’re dealing to your opponent.

As you can see here, the Aqua Strider has an Aquatic attack, and the arrows work slightly different here: the green arrow means you’re dealing bonus damage to an Elemental pet, but if you fought a Magic type, your attacks would be significantly weaker. Putting a pet with Aquatic moves against an Elemental is what is known as a hard counter; you’re making sure you do more damage so your opponent gets fewer hits in, letting you win that little bit more easily. 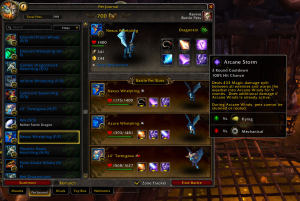 Not all pets have moves that are the same type as their family, though. A lot of pets have a range of abilities across several different families. Some pets even have a majority of attacks that are of an opposing family.

One good example of this is the Nexus Whelpling: four of its six abilities are Magical, which, as you can see, are strong against Flying types. This pet is one of my staples against any Flying types I encounter.

If you look at the following image, you can see why. It’s going to take 33% less damage from any Flying-type attacks.

Having a pet able to take less damage from its opponent, while dishing out more, is known as a double counter. While it is generally the preferred way to go, since you can move on to the next fight quicker, while leaving each battle with more health, any counter can be an advantage for you if you plan your teams properly. 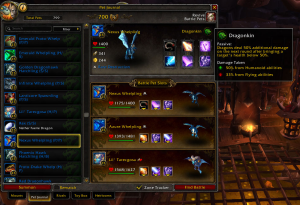 Going into any PvE battle, you are guaranteed a predictable battle: the tamers don’t change their pets, and it is very uncommon to find a tamer that changes the moves their pets use. At this point, the only one I can even think of is Kura/Erris, your friendly traveling menagerie tamer who, every once in a while, has her rats take alternate move sets.

Even wild battles can be fairly predictable. Most zones have set pets that can come as secondary pets and, to a greater or lesser degree, you can counter most of what is going to confront you in each zone. Valley of the Four Winds and Vale of Eternal Sorrow are both good farming spots, because for the most part you find each wild battle has maybe two types of pet to deal with, making them easiest to counter, and thus use the zones for carrying lower level pets.

It’s harder to prepare for a PvP battle ahead of time, as there’s no guarantee you’ll face the same team twice, but knowing what family counters which is very important for knowing which of your pets you should bring out first, and whether or not you should switch a pet out.

While you’re still learning, it’s always helpful to have a handy cheat sheet. Mousing over each pet can be tiresome, so having an easy reference on hand can help you decide if the pet is worth looking at closer, or if you should move on to another, more capable pet.

WarcraftPets have an excellent cheat sheet available for print out here.