Repping with Leashes – The Anglers 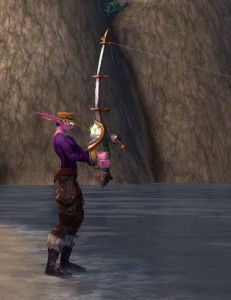 Ahh, fishing. You either love it, or hate it, within WoW.

Personally, I like it, but I know it’s not for everyone. Sometimes it can be soothing to go out to a remote location, fish and listen to music. For some, I think they’d rather go to the dentist and get worked on without anesthetic.

Today we’re delving into reputation with The Anglers of Pandaria. So, if you despise fishing, you’ll want to skip this and, as a possible ‘spoiler alert’, you might want to skip next month’s one too.

So… The Anglers. They’re a small community in the southeast portion of Krasarang Wilds, made up mostly of Pandaren. However, they’re not exclusive: Hozen, Jinyu, goblins, and even humans and Tuskarr are welcome among them, as long as they share a love of fishing. And of course, who is the most famous fisherman in Azeroth? Well, Nat Pagle, of course. And he’s here, fishing in a boat in Angler’s Wharf. 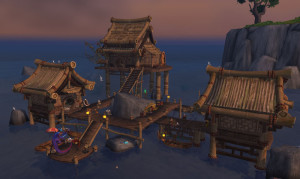 The pet you can get from The Anglers is none other than a fish, of course. It’s a tiny goldfish! He looks suspiciously like Fishy, which you get upon completing the Hozen/Jinyu quest line in the Jade Forest, and has all the same abilities. If you’re collecting pets to get a complete set, that probably won’t matter to you.

You need 9000 reputation in total to go from Neutral to Honored, and you can get it by starting at level 89 in the Dread Wastes with the Soggy’s Gamble quests, or solely through dailies down in Krasarang starting at 90. I advise going to Soggy’s Gamble. It will get you about 2500 rep, which is almost all of Neutral, and shorten your grind by at least a day.

Soggy’s Gamble is located in the southeastern portion of the Dread Wastes. It’s a cove, where Captain “Soggy” Su-Dao and his crew are. To start, however, you have to go to Ambersmith Zikk and get Gambling Problem. To get that quest, you have to be far enough into the Klaxxi paragon quests to have opened up Klaxxi’Vess.

The first person you’ll go to is Deck Boss Arie, who will give you a variety of quests: Mazu’s Breath, You Otter Know and Fresh Pots. From there, he’ll send you to meet the Captain, walk “Dog”, and do other quests.

There are a total of 11 quests, with 2520 in rep, getting you very close to Friendly with The Anglers. Once done there, head to Angler’s Wharf for the dailies.

Every day, three quests are available at Angler’s Wharf. Despite what you’d think, not all the quests are ‘fish up X of this fish.’ In fact, only a few of them are. Some of them involve you using bombs to kill fish (quest name), harvesting bait in the jungle (quest name), killing raiders (quest name) or using a fishing spear to get your catch (quest name). No, the last one does not improve your fishing skill, sorry.

The three quests will net you 1500 reputation (500 each) without any rep bonuses. When you cross into the next section of rep (Neutral to Friendly), The Anglers will sometimes reward you with two additional dailies, for another 1000 rep. If you started at 0, and did all of Soggy’s Gamble, and then The Anglers daily, and the two additional quests for crossing into friendly, you would be at 2020/6000 into Friendly.

There are three fish you can fish up that have quests: spinefish alpha, mimic octopus, and flying tiger gourami. Accept the quest(s), and turn it/them into Nat Pagle at Angler’s Wharf. Not only do these give you rep for The Anglers, but you also get reputation with Nat Pagle, which can be useful if you want a Land Shark (more on this next month). Each fish gives 350 reputation, or 1050 reputation if you fish up and turn in all three. That should bring you to 3070, or just over halfway.

If you continue doing the three dailies, and fishing up the flying fish on day 2, you’ll only need to do one daily on day 3, and Tiny Goldfish will be yours!