With all of last month’s talk about The Anglers of Pandaria, it made me feel weird to not talk about Nat Pagle. 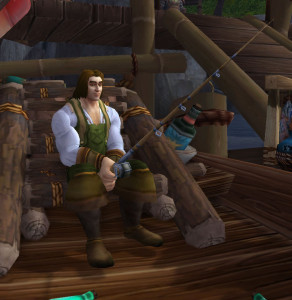 I mean, Nat’s been in the game as long as I’ve played, and, well, if you fish, you probably know Nat. Back in Vanilla WoW, you went to see him out in Dustwallow Marsh to learn to fish, and rumors went around that he knew how to find the fabled Ashbringer. If that interests you, check out this week’s Throwback Thursday, where I go into detail on that.

Nat doesn’t appear to be going anywhere, having shown up in Draenor as a potential garrison follower. From what I understand he’s very difficult to get. I’ve been lazy and skipped him so far. A friend of mine enacts revenge on him, now that she has him, by sending him to “Clean the Latrine” every time that mission comes up. But I’m rambling. This is Repping with Leashes, not Smadronia’s chat time. That’s Throwback Thursdays. =P 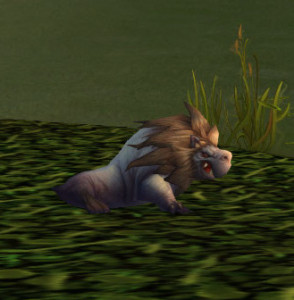 Before Warlords of Draenor, Nat wasn’t a rep you needed to worry about, because he wasn’t selling a pet. That’s changed now, and he sells a Sea Calf and Land Shark now. The Land Shark requires you to be good friends with Nat, because of course you need a rep for a guy who’s decided your garrison is worth hanging out in. 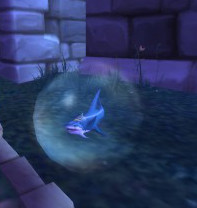 Yes, Nat is as simple, and as hard, as fishing. Lots of fishing. But, we’ll cover all that.

Getting Reputation with Nat
You’re going to need to get to Good Friend with Nat to buy Land Shark, and that’s not a quick process. You’re going to have to go through Stranger, Pal, Buddy, and Friend to cross into Good Friend. That means at least 33600 rep to get, or 8400 rep per level. Time to get fishing!

If you don’t have Nat at your garrison, then you have one way to get reputation, unless you can turn in the WoD quests at someone else’s garrison. So, head to Pandaria to fish.

There are three fishing quests you can turn in to get reputation with Nat, and all are obtained by fishing up the unique fish: flying tiger gourami, spinefish alpha, and mimic octopus. Each of these fish is uncommon, and it can take up to 100 catches to get one. I find I can get them in 30-40 casts, but that may not be average. Expect to spend an hour or so fishing these guys up.

Flying tiger gourami are fished up in the inland rivers and lakes, like outside Binan Village in Kun Lai Summit. I recommend flying into Binan and fishing in that area, since the spinefish alpha is also nearby.

Spinefish alpha are evil little suckers, and only show up in Sha infested waters. The waters north of Binan Village, near the Inkgill Mere are an excellent location. Plus, once you get your alpha, you can move to the non-infested water and fish up the flying tiger gourami, if you haven’t already.

Mimic octopus (Octopi? Octupusses? Whatever, I’m a blogger not a marine biologist) can be fished up in coastal waters anywhere on Pandaria. I tend to leave this fish for last, and fish it up on the docks of Angler’s Wharf in Krasarang Wilds, since turn in is right there.

You can only have one of each of these fish in your inventory at a time. So, once you’ve caught one, move onto the next one. If you’re going to continue fishing after turn in, you can catch another, but you won’t be able to turn it in until tomorrow.

Each fish will earn you 600 reputation with Nat. At 1800 reputation per day, you’re looking at 19 days of fishing, without any reputation buffs. I strongly suggest using a reputation buff, like the Darkmoon Fair carousel, to aid your turn ins. Or, get Nat at your garrison.

If you’ve gone through the blood, sweat and tears to get Nat in your garrison, then you have an additional way to get reputation with Nat: fish up lunkers. 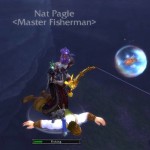 My friend who sends Nat to clean the latrine hates fishing up lunkers so badly that she killed Nat and uses his corpse as a raft. I doubt she’s the only one who gets annoyed with the lunker fishing.

Lunkers are a special fish that Nat will helpfully take off your hands once he’s come to the garrison. They’re unique to five, so you can have up to that many lunkers of each type. You can also turn in more than one of each lunker each day, so if you fished up a couple, you won’t have to wait until the next day to turn them in.

You know how the rare fish in Pandaria take a while to catch? Lunkers are like that. They can take forever. The drop rate was improved after Draenor came out, but it’s still pretty low.

Each zone has a specific lunker attached to it, so if you want to catch them all, you’ll be traveling a while. All lunkers reward the same amount of reputation and currency: 350 reputation with Nat, and 1 Nat’s Lucky coin.

If you go on the idea you can catch three lunkers in an hour (which many people say is doable), then you’ll get 1050 rep per day with Nat, on top of any other turn ins you do, like additional lunkers, or Pandaria quests. If you only do the three lunkers a day, you’re looking at 32 days of fishing to get Nat to Good Friend. At that point you’ll also have 96 coins, which is almost enough for both pets.

I recommend a combination of both lunkers and special fish in Pandaria, if you can devote the time to it.
Breakdown of time to get to Good Friend
19 Days (Pandaria only)
32 Days (Draenor Only)
12 Days (Pandaria + Draenor)

Getting Nat To Your Garrison

Getting Nat to your garrison is something you’ll eventually have to do if you want to buy the pets, or any of his WoD goodies. You will need to be level 100, have the level 3 garrison, a level 3 fishing shack, and 700 in Fishing skill.

To get the level 3 fishing shack, you have to complete Draenor Angler, a meta that requires you to fish up 100 of each enormous type of fish found in Draenor, minus the Crescent Saberfish. Draenor Angler is a cross character (and faction) achievement, so you’ll only have to do this once.

So, now that you’ve fished your brains out, you’re seeing fish in your dreams and you have a level 3 fishing shack, right? Your fishing shack buddies will send you on a quest called Luring Nat, where you fish up an Arcane Trout if you’re Alliance, or a Molten Catfish if you’re Horde (Luring Nat).

From there, your fishing shacks buddies will send you to find Nat (quest). If you’ve been fishing to get him to Good Friend, this will be laughable, since he’s still at Angler’s Wharf in Krasarang. Once you’re there, Nat will ooh and ahh over your fantastic fish he’s never heard of, and decide to join you. He’ll send you back to you garrison with a journal page as proof (quest), and then show up later.

The funny bit? By the time you get back to your garrison, Nat is at the fishing shack. So why you have a page from his journal to prove to your fishing shack buddies that you met Nat. Yes, the same Nat standing RIGHT THERE.

Remember that rage, if you have any, while Nat turns you loose on his next quest: quest (Fishing for Lunkers)! You’re in for a treat. These are the rare fish of WoD, like the Mimic Octopus and other fish in Pandaria. These tend to inspire a little more rage in some people, since they can be extremely difficult to catch if the random number gods are not on your side.

After you visit all the zones in Draenor and fish up a lunker in each, Nat will become a garrison follower. From there you can assign him to the shack, send him on missions, deactivate him or do whatever you’d like. I’d recommend getting him to Good Friend, if you haven’t already.