To new players, the Ashbringer might only dredge up memories of “that weapon Paladins are going to get in Legion.”

Older players, especially those who played during Vanilla and Wrath of the Lich King, might think otherwise. References to the Ashbringer started in Vanilla, prompting people to speculate for years about it.

So, what is the Ashbringer?

Well, it’s a sword of epic undead-slaying. During the time of Warcraft 2, Alexandros Mograine took a crystal from a dead orc in Blackrock Mountain. It tainted Mograine’s hand when he touched it, and no spell could remove the taint. He kept the crystal a secret until Arthas and the Scourge became a problem many years later. At that point, he showed it to the Silver Hand (predecessors to the Argent Dawn). They tried to destroy it, and instead purified it. It was decided it would be fashioned into a weapon to defeat the Scourge.

Video not clear enough? The entire Silver Hand scene can be witnessed in person in Old Hillsbrad in the Caverns of Time.

Once the Ashbringer was fashioned, it cut through the undead, and garnered attention from the higher ups among the Scourge. When it became clear that Alexandros Mograine intended to take back Lordaeron from the Scourge, Balnazzar and Kel’Thuzad teamed up to eliminate him. They corrupted his son, the Scarlet Commander Renault Mograine, and used him to set a trap for Alexandros and his adviser High Inquisitor Fairbanks in Stratholme. Yes, the same High Inquisitor Fairbanks that’s now found as a dead undead in a secret room to the right of the altar at the end of the Scarlet Monastery.

The trap in Stratholme proved to be the undoing of Mograine and Fairbanks. Scourge swarmed them, and were cut down by the Ashbringer. Eventually Fairbanks was buried under a pile of Scourge corpses. Mograine continued to fight, but eventually dropped his weapon in exhaustion. Renault came out of hiding and killed his father with the Ashbringer. The act corrupted the Ashbringer. Kel’Thuzad resurrected Alexandros Mograine, turning him into a Death Knight. He regained the now corrupted Ashbringer, and became one of the four horsemen in Naxxramas. Renault became Commander Mograine in the Scarlet Monastery, and Balnazzar, in the guise of of a Grand Crusader, headed the entire Scarlet Crusade.

When Vanilla WoW launched, there was no Naxxramas, but there was a lot of speculation of where the Ashbringer could be. Some people thought that the Shen’dralar in Dire Maul knew the location of it. Others thought maybe the Argent Dawn knew. Still others thought that Nat Pagle knew where it was, and that you’d fish it up.

More than ten years later, the fishing idea seems pretty silly, but at the time it was considered reasonable. The copy of Nat Pagle’s Guide to Extreme Anglin’ mentions the Ashbringer. The only page left in it says:

… and so that’s where you’ll find the legendary sword of the Scarlet Highlord, Ashbringer.

Ain’t it amazin’ what you run into in an ordinary day of fishin’?

Ultimately, the Ashbringer’s whereabouts was revealed when the original Naxxramas came out. The corrupted Ashbringer was lootable from the Four Horsemen’s chest, and finally gave many Vanilla players some closure on the subject.

That wasn’t all though. If a player had the corrupted Ashbringer and went to the cathedral in the Scarlet Monastery, a scripted scene would play out where the Scarlet soldiers would be friendly to the player (and their group, if any), and Commander Mograine of the Scarlet Crusade and Highlord Mograine would roleplay. Also, the player wielding the sword could talk to High Inquisitor Fairbanks and find out what happened to Alexandros, and to him, after the betrayal.

This is the first video I ever saw of the event, from the world first Corrupted Ashbringer drop. I hated the music until I realized it’s Weird Al.

For those who wonder what staff the priest is wielding in the video, that’s Atiesh, Medivh’s staff.

If you’d like to see the scripted scene with the actual sounds, you can see it below.
There was also machinima done of the event, in case you can’t hear the voices that well in the videos. It’s shot really well.

High Inquisitor Fairbanks explains that the corrupted Ashbringer can’t be redeemed, but that Alexandros had another son. That son, who was supposedly in Outland, could forge a new Ashbringer. There was another son, but he didn’t appear in the Burning Crusade expansion. Instead, he appears inWrath of the Lich King: Darion Mograine.

After Alexandros was reanimated and installed in Naxxramas, his son Darion went to try to rescue him. The attempt failed, and instead, Darion killed his father. Darion took the sword to the Scarlet Monastery to confront Renault. The scene in the videos above is what happened. Some time after that, in a final attempt to free his father, Darion stabs himself with the Corrupted Ashbringer.

It didn’t work, and Darion was resurrected as a Death Knight like his father, and became the Highlord of the Knights of the Ebon Blade. In the Death Knight starting area, he is seen wielding the Ashbringer. This explains why the blade is no longer available to players. Once Naxxramas was re-released for Wrath of the Lich King, Baron Rivendare replaced Alexandros Mograine as one of the four horsemen.

During the battle for Light’s Hope Chapel, the Ashbringer turns on Darion. Unbeknownst to him, the Lich King sent Darion and the other Death Knights into a suicide mission, as Light’s Hope has something buried beneath it that withstands evil. Darion gives up the Ashbringer, letting Tirion have it. Tirion’s touch purifies it, turning it into the Scourge-beating weapon it originally was.

If you don’t want to hear about Legion, stop reading now, because the Ashbringer makes a reappearance in Legion, for retribution Paladins. 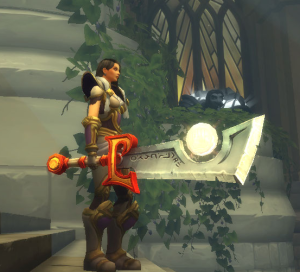 My alpha character with the Ashbringer

This information is accurate as of mid-February, 2016. I’m in the alpha, so I went and played through this, so I wouldn’t be giving incorrect information.

After defeating him, you run into a cave to retrieve the Ashbringer. Balnazzar is in there. That guy will not die, I swear. He has you grab the Ashbringer, and you fight. He disappears before you can finish him off.

You get called back to where Tirion is, and he’s dying. He entrusts the Ashbringer to you, and dies. The other paladins decide to take his body to Light’s Hope, and inter it in the Sanctum below the chapel. They ask you to go.

Once at Light’s Hope, you’re told that the Paladins are without leadership now that Tirion is gone, and since he entrusted Ashbringer to you, you are the best choice. You go through a process where you inscribe your name in a book, and you’re announced as the leader of the now reformed Silver Hand. Both Horde and Alliance members pledge their allegiance to you, and the crowd, gathered for Tirion’s memorial, cheers.

And that is the story of the Ashbringer.