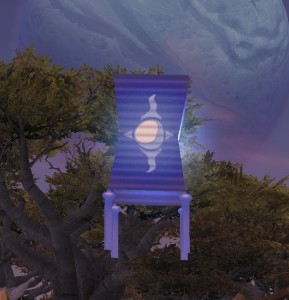 With the Lunar Festival having come around again, this month we’re focusing on one of the pets you have potentially obtained from the festivities. For just 50 Elder coins, or two continents of sheer boredom or exploration, you can obtain this from the vendor in Moonglade, [name], if you’re Alliance. If you’re Horde you can purchase the identical Festival Lantern.

While the item for this pet is blue, the learned pet is of green quality. Short of purchasing an upgraded lantern from the auction house, you will need to upgrade this pet at some point.

This particular pet belongs to a small group of pets whose main utility is in their Flash/Light move combination. The Festival Lamp’s main strength comes from its standard damage attack, as opposed to the Nordrassil Wisp‘s AoE attack. This strength is countered by the fact you do have to upgrade it, and you can only have a B/B breed. Nordrassil Wisp has greater breed variety, and the AoE can take out the back line pets before they can even attack you.

Speed doesn’t necessarily mean everything in pet battles, and in this case having Flash, an ability that blinds your opponent for two rounds, can potentially buy you a free hit. Reducing an opponent’s chance to hit by 50% can have a very large impact in battles, both for PvE and PvP.

In PvP especially it can force your opponent to swap or else run the risk of missing their attacks for two turns straight. To top this off, Light deals double damage if your opponent is Blinded. It also does comparable damage to your main attacks should the opponent choose to swap, so you aren’t losing normal damage in the event of a swap.

Used in conjunction with a pet that has Moonlight, you can boost its magic attacks through the weather effect.

When testing the PvP aspect, I did manage a few wins when combining the lantern with Nexus Whelpling and Anubisath Idol, since these are both strong pets. However, I found the test matches to be inconclusive and suffering from not really knowing anything about pet PvP. During the battles I came across a team that would use Call Darkness every so often. Using Flash meant that whatever pet my opponent had out at the time gained an even larger chance to miss. This effect can also be achieved with Sandstorm, although any elemental pets would have only the basic Blind from Flash.

Overall, the Lunar Lantern is a solid pet if you need an easy-to-get magic pet while you search for the perfect wild pet. While Nordrassil Wisp has more all round utility due to the breed variety, the two lanterns are no slouches either when it comes to battling.