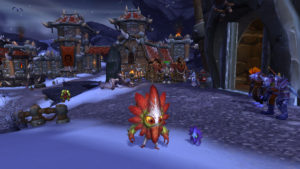 There is a remarkably large variety amidst the three Warlords sproutling pets. While they are all much the same in appearance, their movesets have enough differences to make each one unique to use. Unlike a rabbit, where they’re the same across the board, these differences make for a rather more flavorful dynamic amidst similarly skinned pets.

The largest difference comes from the Nightshade Sproutling, however. While the other sproutlings focus on healing and damage, the Nightshade is all about blinds and poisons. While Call Darkness doesn’t have a setup like it would on a Crow, it does have versatility in choosing whether you go for a heal over time, if you want to force your opponent into taking a blind debuff. Being an Elemental, the night weather effect doesn’t apply to your sproutling and can give a significant advantage at times. As an added advantage, healing teams that are minus an elemental are made a lot easier to deal with.

In the first slot, you have a choice between straight up damage and a damage over time. Personally, I prefer the Poison Lash, as inevitably you will face a Mechanical Pandaren Dragonling while PvPing, and having a bit of extra speed on a sproutling means you can put the DoT on, and the Dragonling takes damage while you destroy the inevitable Decoy that is thrown out. This is a less important decision in PvE, but having the extra tick of damage each turn can wear an opponent out that much faster.

In the third slot is a choice between a massive chunk of damage, and an avoidance move. While, again, the Nightshade Sproutling doesn’t have the moves to take best advantage of Blinding Poison, for PvP, simply being able to force your opponent into missing for two turns can be a very big advantage. Even multi-hit moves that land the last two hits because of mechanics can be reduced in effectiveness with a blind.

I’d been having a decent run with a team for the A3 Team Challenge, so rather than trying to figure out a random new team, I went with what’s easiest, and replaced my Death Adder Hatchling with a Nightshade Sproutling, and decided to run my remaining PvP encounters with the marginally modified team of Nightshade Sproutling, Anodised Robo Cub and an Ancient Nest Guardian.

My first battle was against a Pandaren Earth Spirit, and two Mechanical Pandaren Dragonlings. With superior speed, I was able to use Blinding Poison and put up Nature’s Ward on my free round. While these abilities came off cooldown, I used Poison Lash to deal damage. I wasn’t totally avoiding damage, but I was able to avoid a fair chunk of it and heal some of what I took. The Earth Spirit switched out for a dragonling when it was close to low health. The dragonling started off attacking and took a blind to the face for its troubles. The dragonling didn’t drop its decoy until the third round, so I managed to get a poison onto it before it hid. Breaking down the decoy meant Nature’s Ward had actually dropped off by the time I could get into my next blind and heal, at which point my opponent ran. The sproutling would have died eventually, but how long that would’ve taken is unknown.

For the second battle I was facing a slightly altered variant of the same team, the player having replaced the earth spirit with Lil’ Ragnaros. This time around I had to think carefully about what I was doing; with his Magma Trap and Sons of the Flames root, choosing when to poison, blind and heal was even more crucial. I was lucky in that Ragnaros’ trap triggered only once, and eventually he was killed. The Pandaren Dragonlings were also a bit tricky. However, getting a poison up on the first turn before healing and taking down the decoy meant I was doing damage while I was occupied with dealing with the decoy. Once that was down blinding, healing and going back into the poison dealt with the first dragonling. It didn’t go down without popping a second decoy, however, and that was dealt with similarly, poisoning, healing then destroying the decoy. By the time I got the decoy down the poison had killed the dragonling once already and a last Poison Lash was all that was needed to kill it for good. The sproutling was very low on health at that point. However, I was able to poison the second dragonling, heal and kill the decoy before my sproutling died. Bringing out my Nest Guardian, I used Entangling Roots{link 16} and Feather Frenzy{link 17} to finish off the second dragonling. The poison had taken the dragonlings health to a point where a critical ‘Frenzy killed the dragonling and the roots procced to kill it again on the same turn.

Overall, the Nightshade Sproutling is a very useful pet and can have a solid place in a darkness or avoidance team. While it doesn’t have the abilities to capitalize on stuff such as Call Darkness or Blinding Poison, it is a good pet for setting up openings that other pets are able to take advantage of.