Base Factions of the Argent Tournament

Hi, I’m FlameFlash. I’ve been in this glorious World of Warcraft that we share since the Burning Crusade.

I’m an altoholic and fairly fresh pet collector, so let’s find all these new possible friends together! 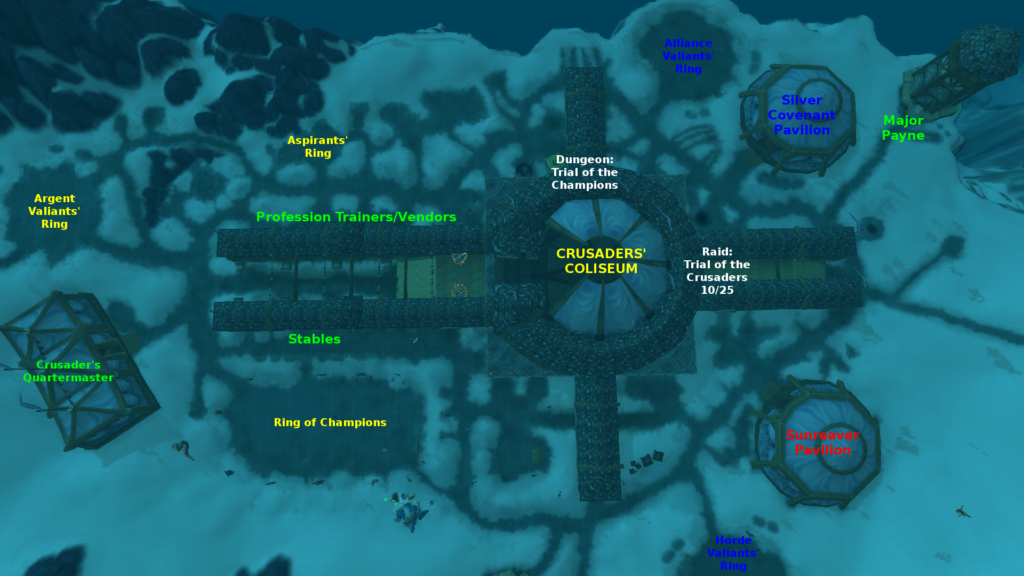 Postcards from Azeroth brought back some fond memories of the Argent Tournament to me, so on my first visit here, let’s take a look at the first reputations we had the pleasure of seeing start to fill up: our home factions! 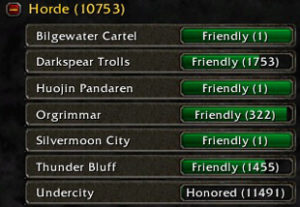 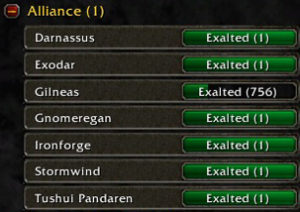 Let’s strap on our Argent Crusader’s Tabard* and find our new friends!

*You don’t have a tabard you say? Then the first thing I’d strongly recommend you spend your hard earned currency on is one of these handy travel helpers, even if you’re a mage. 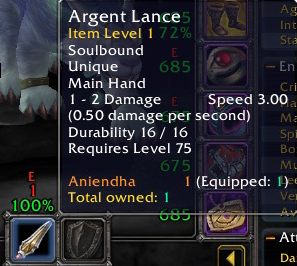 One of the fastest ways to get currency at this point is to strap on an Argent Lance and charge into the Trial of the Champion.

If it’s been a while, you’ll find the entrance on the northern side of the Coliseum, on the opposite side of the building from the flight master.

Once I started things off, it took about six minutes and thirty seconds to beat on the bosses at level 100 and walk out. Do remember to ‘skip the pageantry’ when you talk to the guy in the center.

I tried to first play along and be on my horse, then I realized my guardian druid spec could just swipe all my mounted opponents to death nice and quickly.

One (1) Champion’s Seal every two minutes. Not too shabby compared to some of the other dailies here.

If you want to, now is a good stopping point. You’ll eventually get your pets this way and you’ve eaten less than 10 minutes of time.

If you want to continue, step into your faction’s tent and start collecting your dailies!

As Sandwalker mentioned in the Postcards post, you can (eventually) get 17 of these Seals a day. That means you can average a new pet every other day of strict visiting the tournament.

“Hang on a moment, FlameFlash,” you say. “The tournament either drove me totally nuts or I started playing WoW after this content was relevant so I’ve never done it.”

Well, things will look slightly differently then. First off, turn on low-level quests when you first arrive.

You’ll need to seek out Justicar Mariel Trueheart and sign up for the tournament. 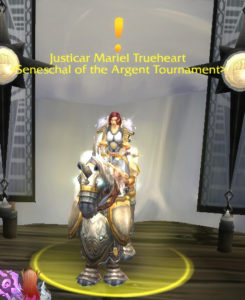 She can be found in the Crusader’s Quartermaster tent and will send you to your faction tent, the Sunreavers for Horde and Silver Covenant for Alliance.

So when you arrive at your faction tent you’ll get an achievement: Argent Aspiration and these three guys will start handing out quests. 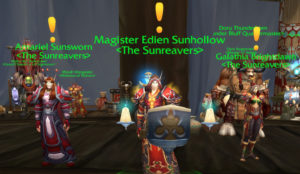 You’ll have to get through them before you can start leveling your faction reps, but as you do you’ll earn further titles, achievements, and currency.

To get the right currency we’ll first have to get Aspirant Seals from these gatekeepers, and that means dailies and quests.

One of the quests keeps you at the tournament grounds, poking at the targets for two Seals each. The other two give you a Seal each but send you around Northrend. It’s all about how much time you have and if you want to tour the continent. You’ll take more time traveling to the locations than actually completing the quest objectives with a level 100.

Curious about the rest of the pets you can grab from the tournament? Feel free to expand the menu below to see them all.