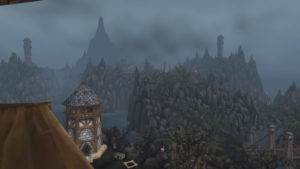 Tol Barad, and its adjoining island, is a level 85 zone situated to the southwest of Gilneas. Despite the geographical closeness, Tol Barad is in its own server zone, much like areas introduced in The Burning Crusade, and thus it is impossible to fly over the ocean to it. In addition to this, the entire zone does not have flying enabled, although it is possible to use certain items to achieve some kind of flight, such as a Goblin Glider Kit.

Tol Barad itself is a battleground, much like Wintergrasp in Northrend. Both were retuned to level 90 in Mists of Pandaria.

If players are inside when the gates close, they will be asked if they would like to join the queue for the upcoming battle. Clicking either ‘Okay’ or ‘Cancel’ will oddly result in the same result — the player joins the queue whether they want to or not. At this point, the player will have to leave via some other means, such as a hearthstone, and cancel the queue via the small green instance queue icon on the minimap’s edge, if they don’t wish to participate. 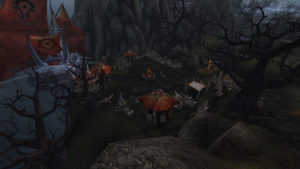 If one dislikes PvP, Tol Barad is a good place to go for farming Honor Points, as there is almost never any enemy players to stop you defending or taking over the three bases. However, with Legion’s launch, Honor Points are being replaced with Marks of Honor, which are account-bound. 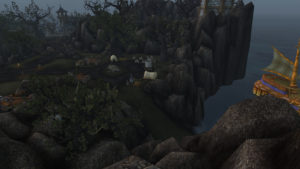 Winning in Tol Barad will award 450 Honor Points, 250 reputation points with the appropriate faction, and three Tol Barad Commendations, which are used to purchase items from the faction vendors. Completing the six dailies at the centre of Baradin Hold will each award 350 rep and one Commendation. Even if one’s faction loses, one will still get 135 honor points.

From there, one can go back to the encampments on the Peninsula and complete the dailies given there. Each awards 250* rep and one Commendation. Doing the dailies, some of which change every day, will eventually lead to getting Just Another Day in Tol Barad. There will almost inevitably be that one quest that refuses to be offered, so be prepared to be frustrated for a few days at least. 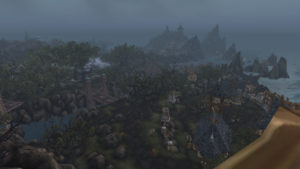 A total of 5,400 reputation points may be obtained each day, and thus it will take about a week to become Exalted if one does the dailies each day.

The quartermasters are Pogg (H) and Quartermaster Brazie. Both provide level 85 PvP items, as well as the following, in return for Tol Barad Commendations.