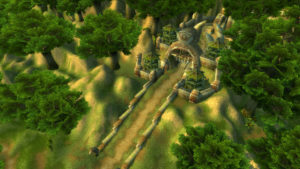 A long time ago, in the mists of grey fog that tends to cloud people’s memories — and clash horribly with the rose-tinted glasses of nostalgia — Zul’Gurub sat ominously amidst the lush tropical jungles of Stranglethorn Vale. Capital of the fierce jungle troll tribes, it was home to the powerful blood-god Hakkar the Soulflayer.

Over a millennium ago, the Gurubashi empire collapsed in the wake of a civil war, after certain influential priests, the Atal’ai, summoned Hakkar’s avatar into the world. The Zandalari, concerned about the effects Hakkar was having on the world, sent every available fighter to alert their jungle troll brethren. Although the priests were defeated and exiled, the Gurubashi society was too damaged, and it collapsed. The exiled priests founded a temple in the Swamp of Sorrows to prepare for Hakkar’s physical coming.

Some time passed, and it was found that Hakkar’s physical form could be summoned only within the great capital of the Gurubashi, Zul’Gurub. A powerful witch doctor, Jin’do the Hexxer, enslaved several of the tribe’s priests to aid him in this endeavour.

Although all the other troll tribes banded together and sent a number of High Priests to the city, each a champion of their respective animal gods — Bat, Panther, Spider, Snake, and Tiger — they were unable to resist Hakkar’s blandishments, and thus added their powers to the god’s.

The Soulflayer presented a major threat to the world, and so heroic adventurers from all over Azeroth invaded Zul’Gurub to put a stop to it, slaying Jin’do, and leaving his shamed spirit to drift helplessly in the spirit world. This would be only a setback…

In-game, Zul’Gurub was a 20-man raid for level 58-60 players, added in Patch 1.7 in September 2005. At the time, the other raids in existance were the 40-man Molten Core and Naxxramas. (No raids would open in Kalimdor until Patch 1.9’s Ahn’Qiraj instances.) Unlike those raids, ZG (as I shall now refer to it) was counted as an outdoor zone, and thus players were allowed to mount up, making for much somewhat quicker movements between bosses.

The instance was sprawling, and all its sections were open (compared to the level 85 Heroic version in which several sections are blocked off). If one flies over the open-world ZG, and compares it to the current dungeon map, the differences are clearly obvious. The open-world ZG gives an idea of what the interior of the original ZG was like. 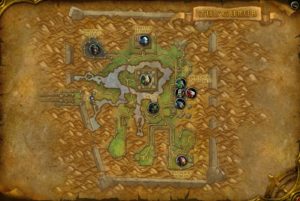 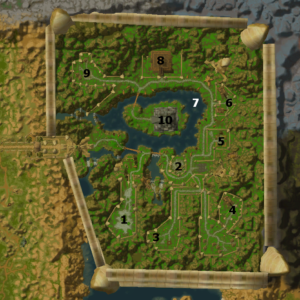 There were ten bosses to defeat, including one that had to be fished up, and an encounter which would spawn one of four bosses. Traversing the instance involved a lot of backtracking, adding to the time required to complete it. The group would proceed from the entrance in a vaguely anticlockwise direction, finishing with fighting Hakkar at the great temple in the centre.

Hakkar’s power was linked to those of some of the bosses; defeating those bosses would remove those powers from him, thus making him easier to defeat. The bosses that didn’t buff him, such as Jin’do, could be ignored. 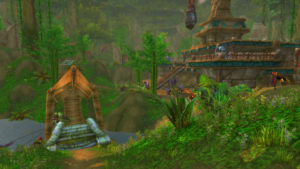 As adventurers progressed through the raid, they could obtain Primal Armor tokens which could be turned in for gear at various NPCs at Yojamba Isle, a small island at the northwestern edge of Stranglethorn Vale. Since the Shattering, the isle is now vacant, with only a few remnants left behind. Items were unlocked at various reputation levels with the Zandalari when quests/items were handed in. Getting Exalted with the faction awarded Hero of the Zandalar Tribe, which is now (a legacy) Feat of Strength with Cataclysm’s launch.

Highly prized from this raid were the two mounts, the Swift Razzashi Raptor and the Swift Zulian Tiger, from Bloodlord Mandokir and High Priest Thekal respectively. With the replacement of the original ZG instance with the level 85 Heroic, these mounts are no longer obtainable from ZG, but are, however, available from the Black Market Auction house.

In order of encounter from the entrance:

Many of these bosses reappeared in the new ZG: 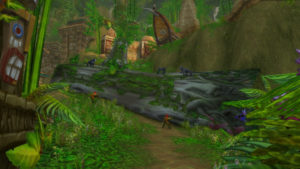 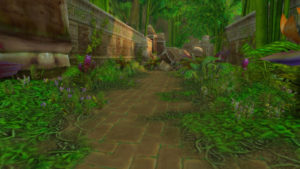 One reappeared in the Throne of Thunder’s Council of Elders encounter as the Gurubashi representative: