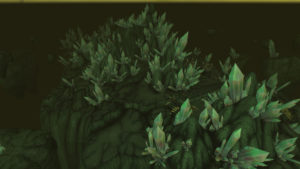 In the southeastern reaches of Outland’s Shadowmoon Valley one will find an area populated by many dragons. These are members of the Netherwing flight, and are one of the more tedious reputation grinds, due in part to the isolated location and the travel time required to get there. Travel time can be greatly reduced if the player has obtained the Blessed Medallion of Karabor, the reward for completing The Fall of the Betrayer.

The process of gaining Netherwing reputation requires the ability to fly. In the Burning Crusade, this was at level 70, but has since been lowered to level 60. However, level 70 is required to start the chain, as Shadowmoon Valley is a 68-70 area. 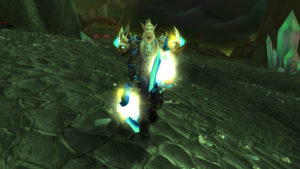 In the Netherwing Fields, one will (often eventually) find Mordenai. He spends a lot of time in combat fighting rock flayers, and his quest marker won’t show up until he’s finished fighting. This can make him frustrating to find.

Once you DO manage to find him, he’ll start the ball rolling with the quest Kindness. This is the first of series of quests that will take you from Hated with the Netherwing to Neutral, with the last quest awarding 42,000 reputation — this is apparently not affected by the human racial, Diplomacy. This chain must be completed to unlock the daily quests.

To continue, the player must talk to Mordenai again, with the added requirements that the player must have Artisan riding skill (at a cost of 5,000 gold before any faction discounts), and a flying mount. Mordenai will apply an illusion to the player that transforms them into a fel orc riding a netherdrake while they are in the vicinity of Netherwing Ledge. This will cause most of the mobs in the area to appear as friendly to the player. 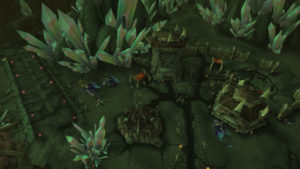 There are several daily quests, and more are unlocked as the player’s standing with the Netherwing increases. One is a profession quest, and will require mining, herbalism or skinning (depending on the offered quest) to be done. Another requires turning in Netherwing Eggs. These can be found in the mines underneath the Dragonmaw Base Camp. At most, five spawn at a time each hour. In Patch 5.3, these eggs were also added to the loot table of Netherspite in Karazhan; 1-3 eggs will be awarded from killing Netherspite. As with all legacy raid loot, the eggs must be rolled for if there is more than one person sharing the kill.

Once the player hits Honored, they can start doing the Dragonmaw Races quests, where they must compete against a number of Dragonmaw NPCs in a flight around the island. ‘Top Gun’ fans will notice that some of the NPCs are parodies of characters in the film, such as Wing Commander Mulverick and Wing Commander Ichman. These races can be tricky, as the NPCs will try to knock the player out of the sky. Druids in flight form seem immune to the dismounting which might occur.

At Revered, a group daily quest is unlocked, the location of which depends on one’s choice of Aldor or Scryer. (Note: if the player is neutral with both factions, the quest might not be offered.)

At Exalted, two last quests are offered, whereupon the player is presented to Illidan Stormrage as a stalwart hero of the Dragonmaw, before being able to talk to one of the six Netherwing drakes nearby to choose their mount:

Whatever colour the player chooses, the other colours are available for 200 gold each from Drake Dealer Hurlunk at Dragonmaw Base Camp.

Important note: If the player arrives in a shapeshifted mount, such as the Sandstone Drake, the fel orc illusion will not be applied, and the NPCs will all be hostile.

Ignoring the eggs, it will take about fourteen days to reach Exalted with the Netherwing.