Repping with Leashes – Order of the Cloud Serpent

Order of the Cloud Serpent

Cloud serpents were one of the easiest reputation grinds for me back in Mists.

Something I didn’t know (or notice) at the time was that once I got them to Exalted, there were pets just waiting for me, ripe for the picking. 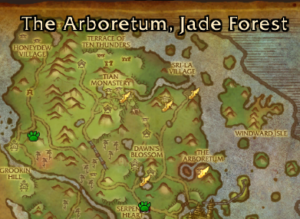 The quests to get the dailies going involve flying out to Windward Isle nearby, cleaning up some of the threats there.

So head on over to the Arboretum, in the Jade Forest, to get things started.

If this is your first time doing it, a level 110 is going to easily mop up the Saurok threats the quests send you out to face.

Once done, you start things seriously for the Order of the Cloud Serpents by the quest “Choosing the One”.

Don’t worry: no matter which color you choose, you’ll be able to buy the other colors once you’re at Exalted. You could also go do this rep grind on multiple characters if you’re a gold skinflint, but it’s probably more worth your time to be prepared to shell out the 2.4k gold per additional mount (prices at Exalted). 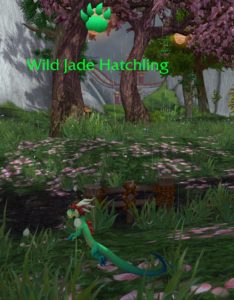 Since the goal of this article is more about pets, though, here’s the thing I missed the first time around: at Exalted there are wild cloud serpent hatchlings!

These guys come in three different colors and lurk around the Arboretum.

Don’t be discouraged if these guys aren’t around a whole lot. They seem to share the same spawn locations as the other critters in the area, blending in.

If you clear out those guys you should help the hatchlings spawn in.

There are three in all. 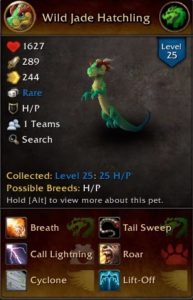 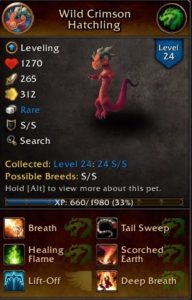 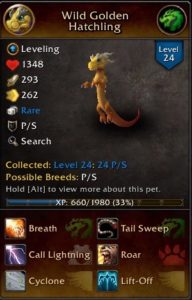 Oddly, while the gold and green pets have counterpart mounts, the red version pet and the blue adult are all by themselves.

While you’re here getting your reputation, there are a few other collections besides the serpent mounts you can get started on.

For one thing, if you take your jewelcrafter in, you can buy the patterns for the jeweled panthers. There’s also a toy: Cloud Ring. Any pet that flies will do a little hop through it. Oddly, the racing-related items they sell aren’t marked as toys.

Feel a little down about the prospect of leveling another faction?

Fear not! Now that Mists is no longer current content, there are likely going to be eggs hiding out on the Windward Isles for you to pick up and turn in for some fast and efficient rep. You can also go out to the Timeless Isle where there are account-bound versions.

Personally, I think it’s more time effective to just do the dailies, but that’s probably because I’ve always had horrible luck finding the eggs.

If I recall correctly, especially with the profession-related dailies, it only took about a week to get it done.

Good luck on wrangling your new mounts and pets!