The Golden Lotus are a faction of Pandaren entrusted with protecting the Vale of Eternal Blossoms. For thousands of years they watched over the Vale, until the arrival of strangers from beyond the mists brought trouble, and ultimately disaster, when Garrosh Hellscream, the increasingly warmongering leader of the Horde, destroyed most of the Vale with the Heart of Y’shaarj. The resultant backlash of Sha energies throughout the Vale killed many members of the Golden Lotus, leaving only a few to carry on their work.

When Mists of Pandaria launched, there was a storyline for the Golden Lotus, coupled with daily quests, ending with the achievement Eternally in the Vale. The Vale’s destruction rendered these quests obsolete, and the achievement was made a Legacy Feat of Strength. The main way to earn reputation with this faction is now by the few dailies given at the Setting Sun Garrison, at the southwestern corner of the Vale, or obtaining Stolen Golden Lotus Insignia from Zandalari Warscouts, which roam around the various zones, or Zandalari Warbringers, which spawn in many locations and stay put. At level 90 these were quite difficult to defeat, but at 100 or higher they are trivial. Almost all mobs killed in the Vale will also grant reputation. The rare ones can be killed for One Many Army; before Patch 5.4 they would spawn only for their related daily quest, but now they are all present (if they’re not already dead).

The Quartermaster for the Golden Lotus is Jaluu the Generous, and can be found in both Horde and Alliance shrines. 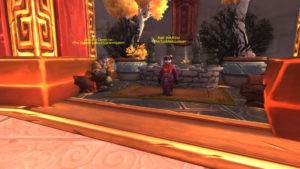 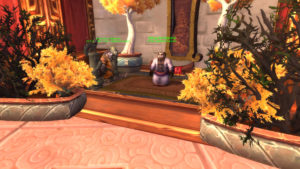 While Neutral, everyone has access to a range of gear items, including neck, shoulders, chest, wrist, gloves, legs, rings and a single trinket.

At Honored, only tailors and leatherworkers gain options, with six and eleven patterns respectively.

At Revered, players can purchase Grand Commendation of the Golden Lotus, allowing them to double Golden Lotus reputation gain for all characters on the account.