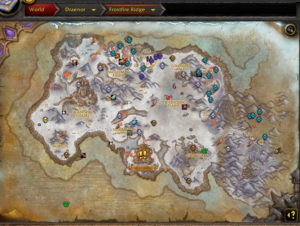 My opinion of most of the Warlords factions is ‘welcome to the grind party.’

What’s fortunate about the Frostwolf Orcs is that they’re the Horde-side starter faction. You basically start questing for them the moment you step into Frostfire Ridge.

Don’t worry, my Alliance friends, you have a mirror version of this faction with the Council of Exarchs, with its own rewards.

If you play Alliance more, you’ll hopefully be comforted that, to get the pet, you only need to be Revered.

Personally, I don’t play Horde very much, so the fact that I have enough reputation for the Frostwolf Pup pet should give you an indication of the level of effort you’ll need to buy one of these guys yourself (if you don’t venture to the auction house.)

My first tip for getting to Revered is therefore simply to quest. Make sure you get the achievement for the zone.

If you’re still missing some reputation, now it’s time to head to the auction house for the dreaded “Medallion of the Legion” again. If you’re buying some to round out your Steamwheedle or Arakkoa Hordeside, then you’ve probably already pushed yourself to the Revered rank. 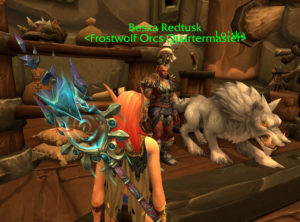 If you haven’t, and you don’t want to drop the gold or spend time farming for the medallion in Tanaan Jungle, your next stop will be just north of Daggermaw Ravine in Frostfire Ridge. This area serves as the ‘fill the bar to complete the daily’ from your garrison and will also reward reputation for killing ‘all the things’. I believe the official map names for them are the Iron Siegeworks, Stonefury Cliffs, and Magnarok. If you’re doing this as a catch-up as a 110, you should have an easier time of it than those who went grinding at 100.

Once to Revered, it’s time to pay Beska Redtusk a visit in Warspear.

She will sell you not only the pet at Revered but also a toy at Honored called the Permanent Frost Essence and a mount at Exalted called the Swift Frostwolf. 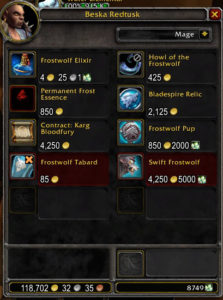 Something to keep in mind is that you’ll need Apexis Crystals for the mount so if you’re going for this, it’d be better to pursue it on a character who did Warlords content already, if you have one.

Before you know it, you’ll have a pup to call your own too. Happy questing! 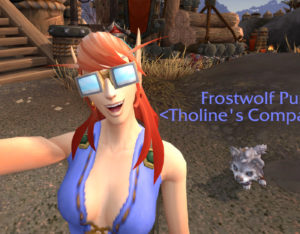