Talent trees. Who remembers those wonderful flowcharts showing the different tiers of talents, and spending points on each to make themselves more powerful (or more useful to guilds)? I sure as heck don’t.

I started playing WoW at the start of Mists of Pandaria, thus I never experienced the talent system as it used to be previously. After seeing pictures of the old system, I’m quite glad that was abolished in favor of the much simpler system we have now.

Originally, there were over 80 talents arranged in several tiers for each class to choose from, and players could put points, which players earned as they leveled up, into each talent. Maxing out each tier would unlock the next one. Contrary to how a tree actually grows, the ‘root’ of the tree was actually at the top, with the ‘branches’ growing downwards. If you’ve played Sid Meier’s Civilization series of games, then you’ll be familiar with this kind of setup. At its height, the system had a maximum of 71 points, during Wrath of the Lich King (presumably 61 in The Burning Crusade and 51 in Vanilla. 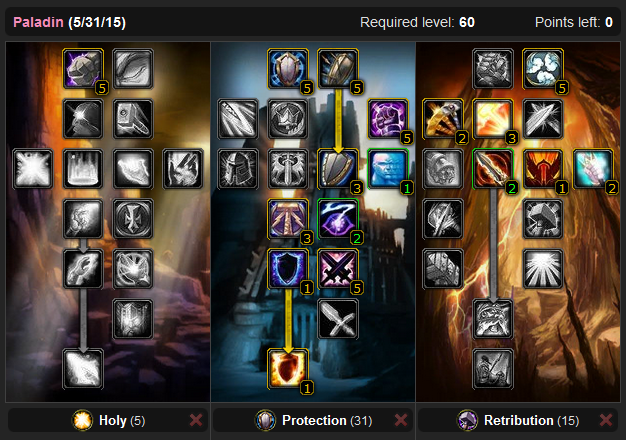 Many spells had ranks, such as Legion professions now do, and some required having to put as many as five points into them to gain the full effect. As one might expect, higher powered abilities were put deeper into the tree, so players had to invest more of their limited points in a particular tree. This was sort of like specializing; putting nearly all of one’s points into one tree would leave fewer points to use elsewhere. Common abilities that nearly all classes would use were in lower tiers.

If players wanted to use a particular talent, they had to fill the prerequisite talents first. The process was cumulative, and options were further limited the more one progressed through a branch.

The result of choosing particular talents was called a ‘build’ and was expressed numerically as something like 10/0/61, showing how many points had been put into which tree. Spreading points out could allow players to be more versatile at the expense of being less specialized in any one tree. Players would often reach the top talent in one tree, and thus any other talents would be chosen with regard to which of them would be the least useless.

Specializations were added in Cataclysm, forcing players to choose one tree and stick with it. However, the talent trees were also simplified, and the number of points that could be spent was reduced to 41. Spending 31 points in one tree unlocked the others, but the secondary talents that could be chosen were relatively insignificant, allowing access to both of the secondary specs’ first tiers, but only one of the second tiers. This was intended to get each spec a particular ‘feel’, and also to reduce the complexity of the system.

Talent trees were completely scrapped with the advent of Mists of Pandaria, leaving us with the much simpler talent system that we have now. Each of the talents could be chosen by any spec in each class. However; Legion has now altered this system a bit so that each spec has talents unique to it, which are unable to be used by other specs.