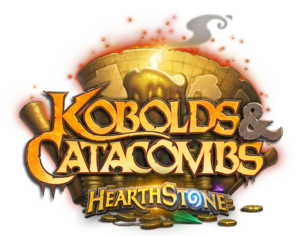 With the Blizzcon opening ceremony came the announcement of the new Hearthstone expansion – Kobolds and Catacombs, an expansion that seeks to bring us back to Dungeons and Dragons. It comes out in December.

They kicked off their panel with the trailer, this time in red/blue 3D for a bit of fun. It was always going to be a treasure expansion, but it started off as Blingtron’s treasure! They decided they wanted it to be more exploration focused, and along came Kobolds and their treasure, especially their candles.

One of the most exciting things about the next expansion is that every class is going to get a legendary weapon! Casters’ weapons won’t have any attack, because they want the classes to still be very separate. They showed off a couple of these weapons, starting with the Priest weapon – the Dragon Soul – which summons a 5/5 dragon per three spells cast. 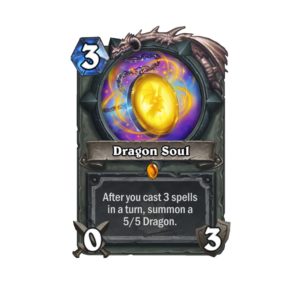 They then showed off the Mage weapon, Alu’neth, which draws three cards at the end of the turn. Alu’neth happens to be the current Arcane mage artifact weapon, and other artifacts will show up in Hearthstone.

Another set of cards they showed off was for warlocks. It starts with Rin, the First Disciple, who has a deathrattle to give you the First Seal. The First gives you the Second, and so on until the fifth, Final Seal. And finally, 31 mana later, you get Azari, the Devourer, whose battle cry is to destroy the opponent’s entire deck(!), instantly putting them into fatigue and forcing them to use the cards in their hand and nothing else. Each seal also summons a demon, starting at 2/2 with The First Seal, and increasing by 1/1 every further seal.

The main mechanic of this expansion is recruiting, which is a summon from your deck. It can recruit a completely random minion, or one with specific conditions such as, costing four or less mana.

New spell cards, designed after traps, are also coming. First up was Crushing Walls, which destroys the outermost minions.

The host for this expansion is the Kobold King, who is the king because he had that one point of intellect that led him to put a lantern around the candle on his head. He does have a plan of sorts, and will be the star of the solo mode. 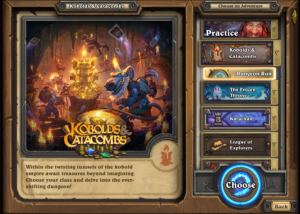 Speaking of the solo mode, it’s called Dungeon Run. You start out by picking a class, and then you get 15 health and only 10 cards, the rest you get in the dungeon which is eight battles long. There are a total of 48 possible encounters, including the rare and difficult Room of Traps. Each encounter gives both treasure and cards. The treasures are cards that give a passive, such as every minion being +1/+1 and will stay for the rest of the run. The cards work by you choosing a set of three cards from one of three themes (such as arcane, frost, or fire). There are also no rules; you can have as many of a card as you can find.

If you die in a dungeon run, it’s a full restart. Your run is over and you pick a class and start again. Given that there are 48 different encounters, as well as a further 40 treasures (only usable in the dungeon run mode), you’ll never play the same dungeon run.

Now came the real challenge: they wanted to put that moment where you find a potion in a chest but have no idea what it is into the game. They did that with three cards that are called Unidentified cards. You put them in your deck and you know one thing: the elixir will give a minion +2/+2, and then something else. When you draw the card, that something is decided. In addition to the elixir there is a shield and a weapon.

The other challenge was a feel of progression, like leveling up and gaining stats and being able to hit things harder. This is where they came up with spellstones, another class-specific set of cards. The collectable card is a lesser *gemstone* spellstone, and how it works is once the spellstone is in your hand, if you do a task such as gaining armor or overloading mana crystals, it’ll upgrade to a normal spellstone, and you can do the task again to upgrade it to a greater spellstone. These can do things like summon copies of minions or deal damage, and the number is what goes up with each upgrade.

There are also treasures outside of the dungeon run, but we didn’t see many of those. We’ll just have to wait until November 20th, when they show off more cards.

In the meantime, if you log in before the expansion you will get a Marin the Fox card.