Blizzcon 2017: Heroes of the Storm Summary 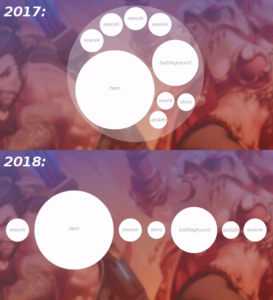 The release of Heroes of the Storm 2.0 saw the highest player engagement ever – even higher than at the launch of the game. In 2017 a total of seven new battlegrounds were added, doubling the number originally available. The developers also gave us some completely new battleground mechanics, including payloads in Hanamura and passive environmental interactions such as conveyor belts in Volskaya Foundry. Fifteen new heroes were added, bringing the current hero total to 75 once Hanzo is playable, more than double the number of heroes at launch! We also saw 16 complete hero reworks and 59 hero balance updates in the last year.

Over the past year, we’ve seen new releases come in the form of large content bundles. These bundles typically included a variety of features such as a new map, an event, multiple new skins, a new hero, several balances ore reworks and more. Developers have found that this sort of clumped content creates too many changes, leading to instability in the meta, and also doesn’t allow new things to really shine. Going forward, the HotS developers want to do releases in a way that is healthier for the game and therefore intend to spread the content out with a more steady pace. 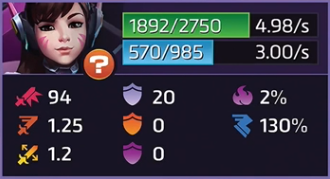 Soon, HotS will feature a Target Info Panel. The goal of this panel is to allow the player to select entities and view information about them. Information included in this panel will include: health, mana, regen rate, attack damage, attack speed, range, physical and spell armor, spell power and movement speed.

Heroes In Hiding
Currently, if a hero is inside a vehicle or object, you aren’t able to see them. You have no real indicator of who is controlling or consumed by said object. This is a team knowledge and strategic problem. As a quality of life improvement, the UI will soon include hero indicators, showing which hero is inside the object, vehicle or spell.

Voice Chat
Blizzard Voice will be integrated into the in-game client. The new voice chat will include two channels, party and team, and function similar to the way that voice chat functions in Overwatch. Players will be auto-added to party chat but will have to opt into team chat. These default settings will be able to be changed. An indicator in the top right corner of the game screen will display who is speaking. The Tab menu will contain the new player controls such as volume and mute, and allow you to switch between the team and party chats if you have joined both.

Performance-based Matchmaking
Performance-based matchmaking of course already exists within HotS, but it’s undergoing some excellent upgrades and improvements to ensure that it’s far more accurate. Matchmaking Rating (MMR) aims to place players of similar skills together in games so that everyone has the best gameplay experience possible. To do this players are awarded an MMR, which represents what the system feels the player’s skill level is at. Upcoming changes to the MMR will make it much more accurate, creating better results overall.

The goal of MMR is to rate an individual on their match performance, rather than to rate them according to how their team did. This can be difficult to accomplish in a team-based game, but many factors are taken into consideration to do this. Previously the MMR mostly relied on adding the rating for wins and removing rating for losses, which can take an enormous amount of games to place you in the rating zone that you belong. During 2017 a lot of new datahooks were added to the game that collect and represent information such as Most Valuable Player (MVP), personalized stats, and an improved on-fire system. The new matchmaking system will utilize these datahooks to increase the accuracy of MMR.

The matchmaking system takes into consideration several other factors when generating a player’s MMR as well. Factors include the hero being played, the battleground and even the player’s region. It uses this information to make fair comparisons to other players. Stats are also weighted differently per hero depending on how important they are for that particular hero.

All of this information is now combined to create more effective and accurate MMR adjustments. So, if you played particularly well in a match and you won, you would gain more MMR points than someone who played poorly. 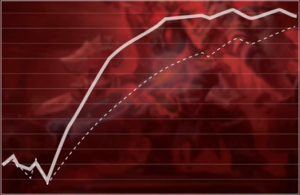 Similarly, if you played well in a match and lost, you would lose fewer MMR points than someone who played poorly. If they are playing poorly and win, they will gain fewer MMR points. If they played poorly and lost, they would lose more MMR points. This allows the player to arrive at the MMR that is an actual representation of their skill much faster, requiring far fewer games overall. The opposite would be true for players who aren’t playing as well.

An interesting feature that arises with the updates to the MMR system is that players who are smurfing or griefing are now able to be spotted much easier. These changes will actually allow for a new system of automation with finding and taking action against such players. The new MMR system will be ready by mid-December. 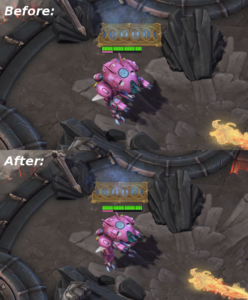 The current camera distance causes large-scale team fights to feel very claustrophobic. This is especially true now because it wasn’t designed with extreme long-range heroes like Chromie, or high mobility heroes such as Medivh or Genji, in mind. The camera distance has been pulled up allowing for a better team fight experience. The goal with the new distance was to increase visibility without sacrificing performance.

Stealth
The current stealth visual has been determined to be far too hard to see for many players. As such, the visual has been updated. In addition to the new graphic, when a stealthed hero stops moving they completely disappear from the battlefield. Stealthed heroes are still invisible on the minimap and cannot be targeted by enemy heroes. Stealth-based heroes have had several updates made to them with the new stealth mechanics in mind, which will be discussed later in the Heroes section.

Laning
The lane phase in battlegrounds currently doesn’t carry enough weight throughout the rest of the game. As such, several changes have been made to make the laning portion of the game more meaningful.

Ammo
Currently, towers have limited ammo that regenerates slowly once expended. Many players will allow their minions to burn through tower ammo, waiting to engage towers once they have run out of ammo. In order to encourage more offensive tactics, the towers will now have unlimited ammo. As such, heroes will now want to push with their minions during tower attacks.

Minions
Minions have had their health and damaged increased. This will help with the more offensive-style tower attacks. 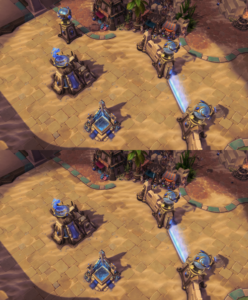 Standalone towers have been deemed as not meaningful to the game. As such, they will be removed. Stats such as health and damage from these towers will be reallocated to other structures.

Truesight has been added to forts and keeps as a compromise. Truesight, which is already at the core, reveals any stealthed enemy heroes once they are in range of the structure’s attack range. This should help defending these locations feel much safer for heroes who rely on them, such as Abathur and Murky.

Map Mechanics
In an effort to enhance the laning experience, battleground objectives are being pushed back, allowing for more lane fight time. This gives players more of a chance to showcase their individual skills. This pushback will affect battlegrounds such as Sky Temple, Cursed Hallow, Infernal Shrines, etc.

The overall goal with map mechanic changes is to reduce the number of various battleground strategies players need to remember, while also not increasing the ideal 20-minute game time. 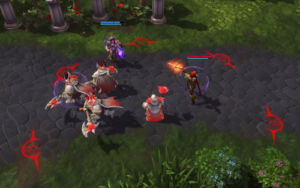 Several mercenary camp units will be undergoing changes, including Knight Wizard, Hellbat Camp minions and Siege Giants. Knight Wizards will emit a spell armor aura granting spell armor to allies, heroes, minions and mercenaries. Hellbat camp minions will decrease enemy unit armor with each basic attack, stacking several times. Siege Giant attacks are already able to be avoided, but it’s not an obvious feature. They will be given an obvious visual to show the area that can be dodged. This will apply to Siege Giants in the camp as you battle to control them and once they have been captured.

Current Heroes Updates
Due to the changes in stealth mechanics previously discussed, heroes using stealth will be reworked to make them function more harmoniously with the updates.

Nova
The Snipe talent (damage increased by 15% each time Nova hits a hero with Snipe stacking up to 5 times and falling off if a Snipe misses) has been changed to a level 1 trait. Nova has a new cloak ability to put her into stealth and will gain a 15% speed increase while stealthed.

Valeria
The duration of Garrote’s silence has been increased. The stun duration of Cheap Shot has been reduced but has had a Blind added to it. If Valeria is Vanished for at least 3 seconds, the next Vanish ability used will have greatly increased range and teleport her behind the target.

Samuro
The Mirror Image talent, which creates two illusions of the hero, has been changed to a level 1 trait. Players will now also be able to swap places with the created illusions. The placement of Samuro and the illusions have also been drastically improved. Finally, illusion damage has been decreased, but Samuro’s damage has been increased.

Zeratul
The Vorpal Blade talent (activate to teleport to the last non-structure target you attacked within 3 seconds) has been changed to a level 1 trait. The Shadow Soul heroic has been replaced with Might of the Nerazim. Might of the Nerazim will replicate the last basic ability used and only has a 15-second cooldown.

Timeline
The laning changes will go live around mid-December. This allows them to launch at the start of the next ranked season, but also before the next HGC pro season so that the pros have time to learn the changes. Alexstrasza is already on the live servers and Hanzo will be released in December. The current hero changes will roll out over the next several months.