Blizzcon has come and gone and with it lots and lots of amazing announcements. On the Overwatch front, a new hero was announced, in addition to a new map, new skins, a new character short featuring Reinhardt, and an update on the Overwatch League.

New Short: “Honor and Glory”
This new animated short features Reinhardt and is just amazing. Be prepared for the feels! 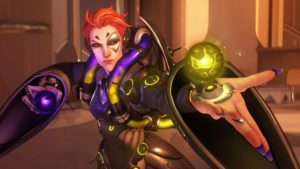 It’s happened Overwatch fans! You’ve got your long-awaited new support healer. Moira is an interesting healer in that in order to heal, she must also do damage. Moira’s backstory is that she is a geneticist who is super focused on furthering her research on how humans are hardwired, so much so that she doesn’t let a little thing like morality get in her way. She was once a member of Blackwatch with Gabriel Reyes (Reaper). Her methods of research were frowned upon by the other members of Overwatch, and when it was shut down she looked for other places that would allow her to continue her research. She found two such places: the city of Oasis, as the Minister of Genetics; and with Doomfist and the other members of Talon, who have been funding her for some time already.

Biotic Grasp: a two-fold ability that can either heal or damage. Regeneration is a healing spray that cones out in front of Moira, hitting multiple targets at once. Healing uses a resource meter that will slowly refill over time. The second option for her main ability is Decay; this is her damaging ability, and rather than being a cone, requires you to aim carefully at your target. Doing damage to enemy players fills up the healing resource meter much faster than allowing it to regenerate on its own. So in order to do optimal healing, you must carefully balance your healing and damage output.

Biotic Orb: also two-fold in its capabilities. This ability sends out a bouncy orb that can heal or damage nearby players. The orb’s size decreases as its energy is spent. Healing or damage is determined before sending the orb on its way.

Fade: This ability is very similar to Reaper’s Wraith form, Sombra’s Translocate or Tracer’s Blink. Moira goes invisible for a very brief period of time and gets a movement boost during that time as well.

Coalescence (ultimate ability): Moira channels a large beam that both heals and damages players in front of her. This ability also pierces barriers like Reinhardt’s and Winston’s shields.

Moira is already available to play on the Overwatch PTR. I’ve played her a bit, and she looks to be a very interesting character. I really like being able to send out the orbs to either heal a teammate who has extended a bit too far or to damage the incoming enemies. Her other abilities will take some getting used to. During the panels, the developers lovingly joked that her name was spelled O.P.A.F. We shall see if that holds true. 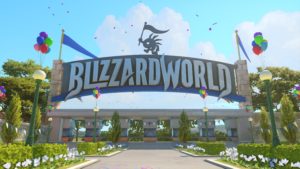 This map is for the Blizzard fan in all of us. Our very own Blizzard Amusement Park!

It’s situated in Irvine, California (of course), and is a celebration of all the worlds and universes of the Blizzard franchise. Obviously, Overwatch is not included because, in the universe of Overwatch, there is no such game. However, the other Blizzard games do exist in that universe as evidenced by D.Va being a professional Starcraft player. The map has Warcraft-, Starcraft- and Diablo-featured areas.

Your adventures. Your communities. Your memories.

Opening soon on PC, PlayStation 4, and Xbox One. pic.twitter.com/yfV6Akd169

It is a hybrid map, which means it has both a control/capture point and a payload. The control point is located in the Warcraft area of the map. Once you’ve captured the point and activated the payload you move into the Starcraft area. At the first checkpoint, you transition to the Diablo area and push to the final point.

There are supposedly many little details and Easter eggs hidden throughout this map that fans of all the Blizzard franchises can appreciate. I, for one, can’t wait to explore this map for myself. It is said to be coming to the PTR soon and is slated to go live early next year.

Another thing coming early next year is a whole host of brand new skins. With the introduction of the Blizzard World map, it seemed only fitting to introduce some crossover skins as well. The ones showcased at Blizzcon are the following:

New cosmetics are coming to Overwatch in early 2018!

These skins (and more) will be coming to the base loot boxes, and won’t be limited to any particular event!

And finally, a little bit about the Overwatch League, the global e-sports league for Overwatch.
This inaugural season of the Overwatch League will debut twelve new teams from all around the world split into two divisions, the Atlantic and the Pacific. This league has 113 players from 17 different countries. The season will contain four stages, each five weeks long. The season is broken up like this so that the map pool can be broken down into more manageable sets. Each stage will have a pool of eight maps to choose from, rather than all 16. The league also features no region locking, just like other professional sports, which means players from around the world can be picked to play on any of the 12 teams. You don’t have to live in Dallas to get picked to play on the Dallas Fuel, for example.

The pre-season begins December 6, 2017. Opening week for the Overwatch League starts January 10th, 2018, followed by the Playoffs starting July 11. Playoffs are determined by the teams’ overall records for the whole season.

Several new spectating features were also introduced at Blizzcon. Team Uniforms will be used for each team with specific color palettes that will adjust everything in the game from the character skins to the user interface to the special effects from character abilities. This will make it much easier to determine who’s shooting whom, and what exactly is going on in the team fight. Teams will have both Home and Away uniforms. The home uniforms are designed to be brighter and more vivid, while the away uniforms will be paler and more muted. They are also working on ways that players will eventually be able to show support for their favorite teams in-game. They already have ways for players to show their support in the real world with the launching of their gear shop, which will include jerseys, hats and more (even socks)! The team gear is expected to go on sale with the launch of the pre-season matches on December 6, 2017.

They’re also introducing the ability to Instant Replay anything from the kill feed, so casters can pick a moment, replay it from any camera angle, and even show it in slow motion, so you can always see exactly what happened. There is also a new third person ‘smart camera’ which is able to follow the action over a character’s shoulder more smoothly. Stats are also going to be tracked across the matches. And the last cool feature is more for the casters and analysts, but it’s super neat, so I’m including in the round-up. It is a top-down map view that shows all players locations on the map at any time, so the casters will be able to tell if a Tracer is flanking to the point and know when to switch camera views.

For this inaugural season, all matches will be played at the new Blizzard Arena, with the goal of next season having actual home locations for each team and having teams travel to the various cities to compete.

For more information on the Overwatch League visit overwatchleague.com and also stay tuned for the Companion App that will be coming soon!

That wraps up my Overwatch coverage from Blizzcon 2017. I was super excited about all the announcements, and I am looking forward to all the things to come!