Repping with Leashes – Order of the Awakened

Order of the Awakened

The main point of getting these guys done is just so you can fly in Warlords content. Fortunately, you only need them at Revered but if you want to press on, making sure you ignored all of the rare items around the world is essential. 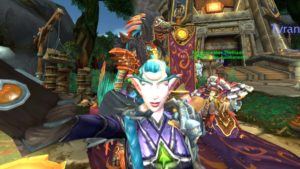 That’s because the quest they give you, called “Unseen Influence” given by Dawn-Seeker Krisek requires you to find treasures and kill rares of Tanaan Jungle. If you ran around with a super-powered Handy Notes addon prior to picking up this quest, and simply emptied the zone, your work is going to be cut out for you.

This was probably my least favorite of the dailies for this reason. Every day you do it, it gets a little harder.

First time here though? I have some recommended stops if you want to hop around and get some key items. 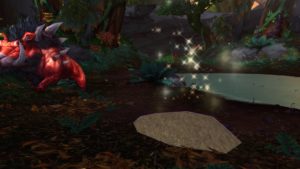 The first on the list would be the Strange Green Fruit found just north of Vol’Mar at 64.58, 42.77. It’ll be in this little glittering mound.

My next recommended stop is the Fel-Drenched Satchel found at 46.92, 44.53 in the broken cart near the Fel water river in the Fel Forge area. 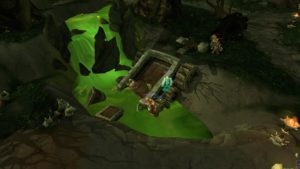 Finally, the last one you can get quickly is the Dazzling Rod. Head to the top of the farthest northeastern tower in Ironhold Harbor (42.81, 35.27).

Once you have these, be sure you also do all the story quests available in Tanaan. This will involve coming back weekly to get the next story items.

Why? Because eventually, you’ll unlock the opportunity to enter the area blocked off at 63, 28 where the Shard of Cyrukh hides. You’re here for pets after all, and this is a great semi-rare one. 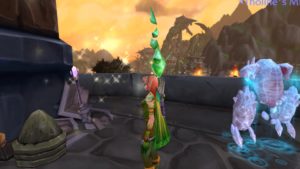 I strongly recommend that addon, by the way. It will save you time and energy in the long run as you try and unlock everything. A word of warning though: it won’t take you to things you’ve already killed. So after you’ve been in Tanaan for a while an addon that will help you find races would be better such as Silver Dragon.

As usual, you can also use the Medallion of the Legion to increase your reputation. After you reach Exalted there’s a rare creature that will let you unlock the ‘Predator title. I’ve yet to pull that off (or get to Exalted) so I would recommend looking up a separate guide.

Good luck getting off the ground in Warlords! You now have all the tools you need to do so.