Repping with Leashes – The Nightfallen

Back in my day, you had to grind through the emissaries or world quests to raise your reputation enough to keep going with this faction.

Well, good news, everyone! That wall is now gone!

So the first thing I would recommend to you is to go and quest through the zone. At this point there’s quite a bit of content, even some ‘dip your toes into LFR’ content. It’s well worth your time and it’ll likely get you super close to Exalted and unlocking the Nightborne allied race for the Horde.

There are some addons that will still help you along your way, however. 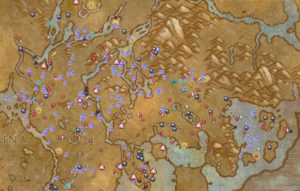 (A little preview of what these addons do to your map.)

For both of these, you’re going to need the base HandyNotes addon. While you’re at it, be sure to grab the Legion-specific Legion Treasures. 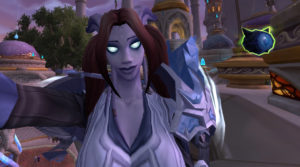 This is a zone that is a ‘must go to’ for unlocking flight in Legion and unlocking the Nightfallen as a playable race in Battle for Azeroth, so it’s worth your time, if you haven’t visited the zone yet, to be sure to head there.

If you’re here more for the pets rather than getting to Exalted, you’re in luck because you need only Revered to get the Extinguished Eye.

If you want for more, there’s a Leywoven Flying Carpet waiting for you as a Paragon reward if you’re lucky. Meanwhile, if you’ve gotten the Insurrection achievement from the 7.1 content, you’re likely going to also get the Arcanist’s Manasaber if you follow the chain all the way through, which includes going to the Nighthold and killing Gul’dan in at least LFR.

Something to be very aware of as you’re going through the zone is to make sure to heed the Handy Notes tips for Legion overall. That’s because you want to be sure to maximize your ancient mana cap. If you watch for the treasures in the zone you’re also likely going to spot them, but the Legion handy notes will help you out a lot.

Finally, another trick to get reputation is to run through the world quest Withered Army Training. Now, before you do this, my personal recommendation is to max out your ancient mana before you start it for maximum impact. Going in as a DPS spec rather than heals or tank is also best if you’re unfamiliar with it. That’s assuming you’re geared up through Argus, though. Go tank if you can otherwise, at least until you get the hang of it.

Supposedly there’s a fox mount buried in there too. I haven’t managed to get it yet myself. Something about a Torn Invitation that will give you a new quest that eventually leads you to the Llothien Prowler. The good news is that invite can also drop from the Nightfallen Emissary caches. There are quite a few toys hidden down in there too. I hear you have to run it a lot of times to really get everything so don’t be frustrated if you go through a few times and don’t find anything super interesting.

If you want your hidden artifact appearances for a few classes then you’ll need to be sure to do the Withered Training. These are all RNG-based so you may have to do it a few times. From my searching, it looks like any chest has a chance of dropping them while the larger the chest (and the deeper you go) increases your chances to get it. I know after seeing the blood death knight one I’m highly tempted to pursue it, even if it means beating my head against Withered Training for a while.

Last, but not least, those world quests and emissaries are a slow but reliable way to eventually get Exalted (and the possibility of that Torn Invitation). The Kirin Tor will help you out some too by doing their emissaries.

Good luck, and happy hunting out there in Suramar!