Beasts of Fable
Ti’un the Wanderer

This month’s strategy is for the Beast of Fable Ti’un the Wanderer, found in Pandaria, in the southeast corner of Townlong Steppes. The Beasts of Fable were the first major pet battle ‘bosses’ that had the Elite buff, which was a new tactic for pet battlers to work around. 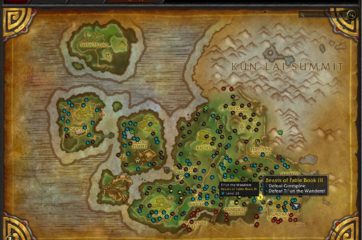 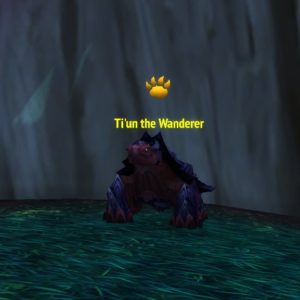 Pets used in this fight:
Ikky and two moths, with Moth Dust as an ability, as backup.

I highly suggest getting all of the above addons. Rematch is incredibly useful for organizing and saving your teams. Battle Pet BreedID is absolutely necessary as it shows the breeds for the pets. Pet Tracker is helpful for not only finding pets’ locations on the map but also for helping you keep track of the enemy pet’s ability cooldowns. Pet Battle Log Keeper isn’t really needed, but I like having it because it saves the log of the battle so if something goes wrong you can review what you or the enemy did and try to fix it, or if you have an awesome battle and want to remember how to beat that opponent in the future.

It is very important to get Black Claw applied first, as that adds to the damage you deal for the next three rounds. Following this up with Flock increases the amount of damage that Ti’un takes even further. Increasing the damage he takes is what this fight is all about as Ti’un has both the Elite buff, mentioned at the beginning of this post, and he also applies Shell Shield to himself, which decreases the amount of damage he takes even more.

After applying both debuffs to him (Black Claw, from the Black Claw move, and Shattered Defenses, from Flock) it should only take one or two hits with Savage Talon to finish him off. However, if he kills Ikky before you’re able to kill him, just bring in one of the moths and use Moth Dust or Alpha Strike, and that should do the trick. I did have a couple of battles where he did just that using Pump first instead of Tidal Wave and the moth was able to easily finish him off.

The full strategy can be found on Xu-Fu’s Pet Battle Strategies website. There are also other alternative strategies for beating Ti’un found there. If the following strategy doesn’t work for you, or if you don’t have Ikky ready to fight, be sure to check out the other strategies to find one that works for you!

If you have a strategy you’d like to see a video walkthrough for, or a tamer that you need help beating, be sure to let us know on the forums! Did this video help you beat Ti’un the Wanderer? Be sure to give it a Thumbs Up on YouTube! Also, be sure to Subscribe to our YouTube channel so you can see when we’ve posted new videos!