You’ve probably traveled to Upper Blackrock Spire to kill whelplings and get the Jenkins title in the past, and maybe someone around you has charged into a boss a little early, yelling Leeroy, but are you aware of where it all came from?

My guess would be yes.

Still, isn’t it fun to revisit old WoW things? And if you’re that person who’s never heard of Leeroy Jenkins and his famous line, “At least I have chicken,” then you’re in for a bit of WoW lore fun today. 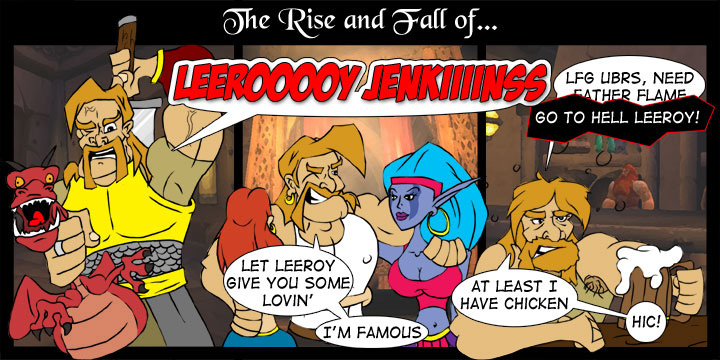 Back in 2005, a video surfaced of an encounter in Upper Blackrock Spire, affectionately called Ubers by some. A group of characters stands around, crunching numbers on whether or not they’ll be successful in summoning Solakar Flamewreath, or Father Flame as he was known. The reason they’re battling? Leeroy needs the Devout shoulders so he can heal better. It gets better from there.

Here, have a look for yourself. I apologize for the fuzzy quality, but this was the best I could find.

So, that’s Leeroy Jenkins. The story could end there, with a silly video that made a few people laugh. Plenty of other videos have gone that way. But this one blew up. Suddenly, it was everywhere.

Yes, everywhere. It became the video to mention in game, out of game to your friends. It showed up all over online. Various forms of entertainment, like SpikeTV, parodied it. Psych references it in the sixth season. It went everywhere.

It even ended up on Jeopardy.

Who says Jeopardy can’t keep up with the times?

And of course, it was on World of Warcraft too. Lots of variations on the Leeroy name, and if you search for Leeroy in the Armory, you find hundreds of Leeroys, many of them male human Paladins. 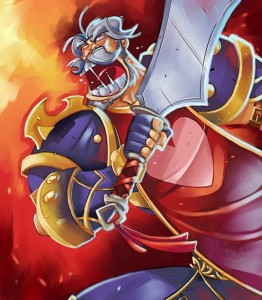 Aside from copycats, Blizzard made good use of Leeroy. There’s the Leeeeeeeeeeeeeroy… Achievement, but they also included him in the now defunct physical trading card game, as an epic character. Hearthstone also has him as a card, where he summons two 1/1 whelps for your opponent (Thanks, Leeroy), and says, “At least I have chicken,” when he’s destroyed.

So, what’s become of Leeroy? Well, his character still exists on Laughing Skull, in the PALS FOR LIFE Guild, but it appears he’s frozen in time at level 85. Looks like his human, a guy named Ben, has moved on from the game, like so many have. At least though, we have video.