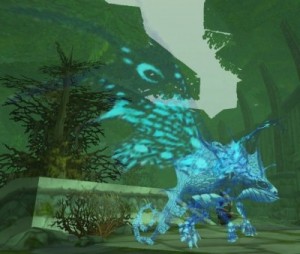 Hi all, and welcome to the first month of Creature Feature! Every month I will be doing a spotlight on a different battle pet. Today I will be focusing on the Nether Faerie Dragon. Since it’s my favorite pet to battle with, I thought it would be appropriate to start with this little cutie!

As I was leveling up my very first team of pets to 25, I ran across these fantastic little dragonkin in Feralas, just outside the entrance to Dire Maul. They were mostly level 11, but I also ran into a couple level 12’s as I was looking for the breed and quality I wanted. To be honest, I didn’t expect much from them at the time – they looked rather flimsy. But, as I attempted to capture the P/P breed, I was very surprised that it was a powerhouse!

I added that same P/P Nether Faerie Dragon to my team, and I found it to be invaluable for leveling in PVE. The Nether Faerie Dragon (or NFD as they are often called) is strong against flying pets, which are often found in the wild. I also found their powerful attacks to be useful against almost all creatures that I encountered in the wild while leveling, as well as many of the Master Tamers. They are weak against the mechanical type, but that isn’t so much of a problem in PVE.

Now, let’s talk stats. If you are not aware of the breeds that battle pets come in, Piwakawaka has done a great overview that you can read here.

There is another option, too, if you feel the 1319 health is a bit low. The Sprite Darter Hatchling has exactly the same moveset, but with slightly different stats. It comes only in S/S breed, which is 1400/276/309. I found mine at the Auction House for a great price, and I use her often. I always use my team of two S/S NFDs and my Sprite Darter Hatchling for the Garrison pet battles that have flying opponents, such as the Beakinator, Quintessence, and the flying trio: Jahan, Samm and Archimedes. Usually I can take them down with one NFD.

The attacks that I always use are: Arcane Blast, Life Exchange and Moonfire. I always start with Moonfire, because it deals heavy damage as well as applying the Moonlight weather effect, which increases Magic damage dealt by 10%. Arcane Blast deals heavy damage as well, and each time you cast it, the damage increases. Life Exchange is a real lifesaver: I use it when I have killed one pet from the enemy team, and the new pet switches in at full health. If my dragon is a little low on health, Life Exchange takes health from the enemy pet to give to your NFD, thus evening out both pets’ HP and giving my little guy a new lease on life!

In order to give a good overview of the Nether Faerie Dragon’s performance in pet battles, I wanted to try it out in PVP. However, I am horrible at PVP pet battles. I have tried them several times over the past year or so and I don’t think that I have ever even won one.

So, in the name of research, I took my favorite team of my Sprite Darter Hatchling and my two S/S NFDs and queued up… with much trepidation. And… I was pleasantly surprised! Now, I don’t think that three Nether Faerie Dragons is necessarily the right choice for a PVP team, but I sure did better than I have in the past! Out of 20 battles, I won 11 and lost 9. Out of the 11 that I won, there were four battles that I only needed to use two pets to take down the other player’s team.

Unfortunately, it seems like a lot of players that PVP use Mechanical and Undead pets on their team. These two in particular are very difficult for the Nether Faerie Dragon to go up against, so again, I don’t really recommend it for PVP. However, my cute little dragonkin team did help me earn a couple achievements, and I even had a bit of fun!