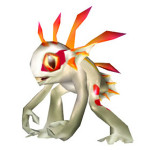 In celebration of the first non-armored murloc attainable in-game, this month’s creature feature will be taking a look at Terky!

If you haven’t found yours yet, you need to head to the Riplash Ruins in Borean Tundra. In a well-hidden underground cave, there is a small egg on the ground that you can loot to obtain. More specifics can be found here.
I am sure you all are as excited as I am to finally have a murloc that is easily obtainable, without attending Blizzcon or purchasing a Virtual Ticket. 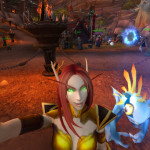 I have been pining away for a murloc with no added armor or extra “stuff” for years – like Murky, who tantalizingly sits in Orgrimmar near the fishing trainer.
Now I actually have one! I feel like this is the best present that Blizz could have given us pet collectors!

I should mention that Terky comes with a cute idle animation in which she (and yes, ever since I saw her I have felt like she is a she, I even named mine Rosie. Take a look at her description in-game, or her page at Warcraftpets.com) wears a hat and dances with a cane. I have not personally seen this animation yet, I’m not sure how long you have to be idle for, but judging from the comments on Wowhead, it seems like it takes some time. 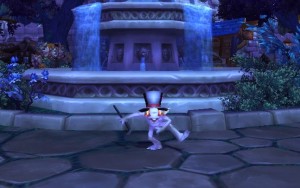 However, if you have the Magic Pet Mirror, you can turn yourself into Terky and then emote /dance. You will don a top hat and dance with a cane, just like she does! Terky also does this dance for her ability, Lucky Dance which is super cute! However, I’m not sure if it is just a glitch for my Terky or not, but the sound for the dance animation comes after the animation has ended, which is a little annoying to me.

So, let’s talk stats for this little cutie! She comes in only one breed, which is H/B – 1546/273/273. It is kind of an average type breed with average power and speed. I have to admit, I was a little disappointed with this, as well as her abilities. I don’t know why, but I think because I waited for a murloc for so long, I was hoping that it would be some super powerful pet, or at least have a unique ability, something that only murlocs have. In my mind, I was imagining something similar to Death Bleat, except it would be called “Mrrrgggllrrggggllll” or something similar.

I was expecting Terky to be a good pet to go up against Undead with, given that she has two abilities that are strong against Undead. However, I found that it was very difficult for Terky to last through the extra round that Undead pets come back to life for. Upon a suggestion from Wakamaru, I pitted Terky against some Dragonkin opponents. For these battles, I used Stampede first, and then used Punch until the cooldown for Stampede was up. I had much better success with this strategy. She consistently was able to take down her Dragonkin opponent, and even had health to spare.

I also ventured into the PVP pet battle realm with Terky. I attempted to give her a strong team, consisting of Weebomination and Mechanical Pandaren Dragonling. Unfortunately, the opposing team’s pets all seemed to take out my poor Rosie within 3-4 rounds. I found myself scrambling with my other pets to try to make up for her weakness, which did not have a great outcome. I did not even win one match, with the exception of someone that forfeited as soon as they saw me (was I really that intimidating!?).

So, does all of this discussion of Terky’s performance in pet battles really matter? I have to answer with a resounding NO – of course not! It’s a murloc… that we can all obtain for relatively little effort! And she is so cute! I am just ecstatic to have my little murloc companion, and I plan to have her by my side as much as possible… and hopefully to one day see her dance!