Welcome to a special Blizzcon edition of Creature Feature!

Murkidan, a gorgeous little puff of slightly fishy-smelling fel magic, is this year’s Blizzcon murloc. Imprisoned for 10,000 years by his brother Murkfurion, he’s now escaped his prison for the comfort of our pet collections via a mildly unfortunate cloning accident. 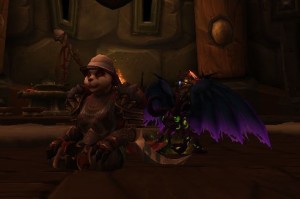 While Murkidan does not come with any emote responses, he does periodically change into his mrrgly demonic form. He has an added bonus of guilt trip for anyone who does not have full possession of his warglaives.

Murkidan’s move set is fairly similar to that of the Fiendish Imp. While there is less emphasis on elemental attacks than the imp has, Eye Beam wrecks any dragon kind foolish enough to cross paths, and Murkmorphosis acts as a themed buff more useful on the PvE side of pet battling.

The full Murkidan move set has Eyebeam and Shadow Slash in the first slot, Fel Immolate and Immolation in the second slot and Nether Gate and Murkmorphosis in the third slot. While the combinations themselves have potential, Murkidan by himself isn’t very good. His greatest strength is in what other pets he works with.

As far as PvP goes he has some utility as far as countering a Murkalot/Graves combination goes. Nether Gate is always good for clearing out a Righteous Inspiration-buffed Graves, although Fiendish Imp is better with its higher speed. 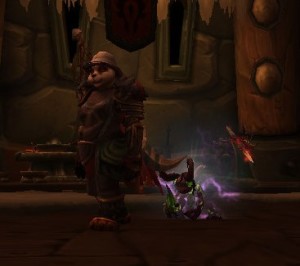 This does not mean Murkidan isn’t usable, however. I tried a combination of Murkidan, Mechanical Pandaren Dragonling and Crawling Claw. Creepy Crate would have worked equally well, but I just wanted to let my Claw stretch its fingers.

My goal of ten wins was achieved fairly quickly. While it would have taken longer if it wasn’t the pet battle event, a well timed Nether Gate often interrupted a setup or alternatively would swap a pet with Fel Fire on it so one pet burns merrily in the background while another gets full Eye Beams to the face.

While I didn’t win every fight, I was winning more than half the time. There might not have been a fair sample size due to the pet battle weekend event, and the low number of pet battles I participated in, but it feels as though with the right team you could do decently well. The important part with Murkidan in PvP is keeping track of which backline pet has the most health for when you want to Nether Gate.

From what I have seen of the ability, it switches in the back line pet with the highest health, so if there’s a particular pet your attacks are strong against, you can work out if you can force it into battle with Murkidan. Even if your opponent decides to switch back to the original pet, they’re still wasting a turn where you can get in a free hit.

Murkidan can have a place in a PvE or PvP rotation, depending on what you are needing. While not necessarily the best pet, he has enough utility to still be useful. His biggest appeal though, has to be his generally awesome presence when you’re wandering around the world.

Check out the rest of Azeroth Adoption Agency’s Blizzcon coverage!