Smadronia here, apologizing for the noticeable absence of my Throwback Thursdays. I became ill in mid-February and ended up having surgery in late March. It took me a while to recover, and while I did, Sandwalker was kind enough to post a guest Throwback. I’m back now, but sharing the writing with him, since he enjoyed doing them.

So… Children’s Week! A week of small kids trying to keep up with mounts, buying sweets and PvP! Are you ready?

Fun fact: School of Hard Knocks was the only thing keeping me from What a Long, Strange Trip It’s Been, for three years. I just couldn’t get into it. This was back when that achievement gave you the fastest flying as a reward, in addition to the mount. 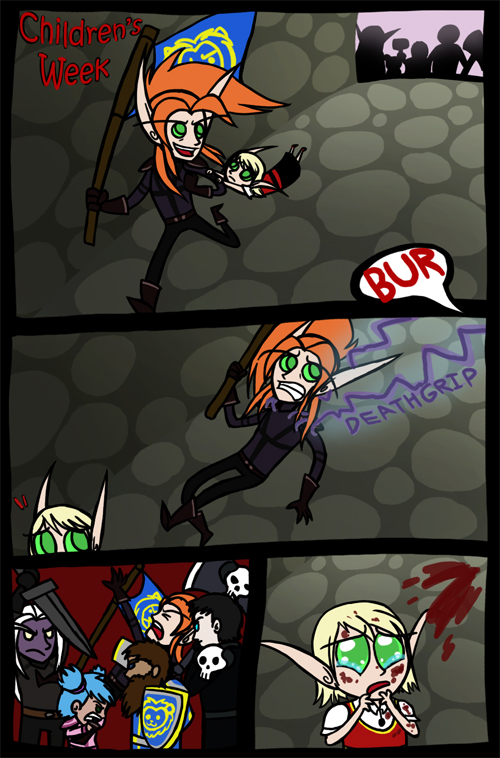 This comic, made by Heceri in 2011, really sums up how I felt about PvPing with a kid in tow.

Children’s Week is one of those events that’s been in World of Warcraft as long as the game has been around. It was added in patch 1.4 and the first Children’s Week was May 2005. Each faction had an orphan to shepherd around, and at the end players could choose a pig, rat or turtle as a pet, or 5 gold. Back then, 5 gold was a pretty sweet choice. Now there’s a snail option too, and the 5 gold doesn’t seem like that great a reward.

Children’s Week was a little different before the Cataclysm. You took your orphan to different places, and, well, there weren’t any rides for your orphan. It was drag them to places, and hope they found it interesting.

View the video below if you want to see the old Alliance Children’s Week.

If you decided to skip the video, here’s where you would take your orphan: the haunted lighthouse out in Westfall, the Stonewrought Dam in Loch Modan, and the Bough of Eternals in Darnassus. How exciting. A run-down lighthouse, a dam and a bank.

Here’s the Horde side of Children’s Week.

Again, if you decided to skip the video, you took your orphan to the Lordaeron Throne Room above the Undercity, the Ratchet Docks and the Northern Barrens, right where you cross into Ashenvale. Honestly, the Horde kids had it even worse than the Alliance. At least the Alliance could throw rocks off the dam.

After the faction-specific quests, all players took their orphans to get Tigule and Foror’s Strawberry Ice Cream. Some of us would drag the orphans down to the racetrack in Thousand Needles (now underwater). However, someone would be selling it in Orgrimmar or Stormwind, so you didn’t have to make the trip.

From there, it was obtain an autograph from either Cairne Bloodhoof in Thunder Bluff or Jaina Proudmoore in Theramore, and then take your orphan back to the orphanage.

Before The Burning Crusade came out, that’s all there was to Children’s Week. In 2007 players were introduced to the orphans of Outland, and then in late 2009 we met the oracle and wolvar orphans in Dalaran. That year was odd, as they didn’t launch the pets until August, so it was like a mini Children’s week. In 2011 the Cataclysm changed all the quests, and added in new pets to collect. Most recently, in 2015, a balloon toy was added, along with a pet care package.