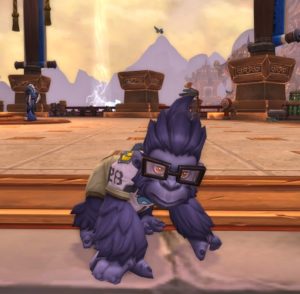 With Overwatch newly released, we’re taking the time to look away from the more accessible pets, and squealing excitedly over the cuteness that is Baby Winston.

Much like his character in Overwatch, Winston has two aspects: high risk attacks that can harm yourself while dealing big damage to your opponent, and Science!

While I haven’t done much P-PvP battling with Winston, I did have the privilege of facing a team containing a Murkidan. I killed him with Logic, an excessively awesomely satisfying thing that, regardless of any proper use you put Winston to, was well worth the effort I went to to get this little cutey.

He also comes with the Heroic Leap ability, a humanoid variant of Fly previously only available to owners of Murkimus the Gladiator. This will be quite useful for walloping Dragonkin while avoiding the big attacks they like to punch at your face.

Teaming Barrier Projector with Primal Rage looks to be a potentially powerful combination for not only avoiding damage, but increasing the damage you deal as well. 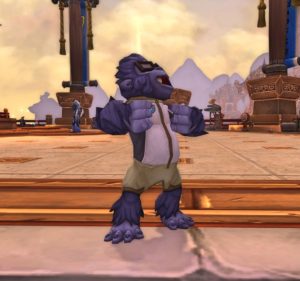 There’s no really clear use for Winston, at least for P-PvP at this stage. Finding pets that have a good synergy with him isn’t as obvious as it can be for some other pets. He presents an interesting challenge for those of you keen on P-PvP, as far as finding what creatures he fights alongside best.

Baby Winston comes with some of the cutest animations. Every so often he has a cute tantrum, and just as often he traps me by fixing his glasses, thereby subconsciously forcing me to fix mine in sympathetic reflex. He also has an overload tantrum and sometimes, if you aren’t paying attention, he’ll pop down his barrier and you’ll look around for a Winston that is several feet behind you looking innocent in his little blue shield.