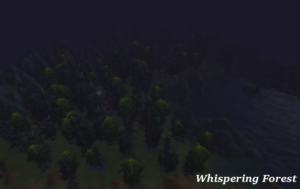 Far off to the west of the Undercity, beyond the Forsaken starting subzone, is the Whispering Forest. Although the area existed previously, it was fleshed out at the beginning of Cataclysm.

Accessible only by flight, the forest is a mysterious zone harbouring as its main features the eponymous forest, a lake and a strange circle of white mushrooms, hidden in the trees.

Rumour has it that the High Elves landed here when they were looking to found Quel’thalas, but after some of the population went insane, perhaps due to the influence of an Old God hidden deep beneath the earth, they packed up and moved on to the northeast.

The lake looks tranquil enough, with a small island off to one side. The island seems like a good fishing spot, as it has a towel, umbrella and a bait-and-tackle box set up. However, the fisherman to whom the items belong appears to have met an untimely end, for his skeleton lies nearby, with a massive sword stuck through his middle into the ground.

If one looks beneath the still waters of the lake, one will find an aircraft embedded in the mud. Perhaps it was the pilot of this craft, if he survived the crash, that killed the fisherman. We may never know.

Off to the south, in the midst of the trees, the faerie ring can be seen. Its purpose may be unknown, but what IS known is that a number of Fey-Drunk Darters will appear, fluttering around it until a total of seven is reached, at which point they will converge on the circle and begin a musical ritual. It is worth enabling the music for this event; indeed, one might even pick up Music Roll: Faerie Dragon, which can be looted from a nest that appears in the centre of the circle. Even the animals which inhabit the zone will come to watch. When the ritual is finished, the darters depart, as do the animals, until the next time the ritual is held, some fifteen minutes later.


Click to view
In Legion, the Whispering Forest is where Shadow Priests and Arms Warriors will come to obtain their artifact weapons.