From the base city factions to Burning Crusade content!

It’s as though Blizzard didn’t have an actual pet system or something early on. :p

If it’s your first time here, talking to Yuula in Shattrath City (Outland) will give you your first quest (and set you neutral with the Sha’tari Skyguard). 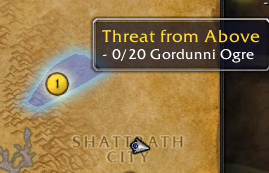 You must be able to fly and be level 70+ to get the quest from Yuula.

The first quest is an intro bit where you slaughter ogres hanging out in the Barrier Hills, just above Shattrath. 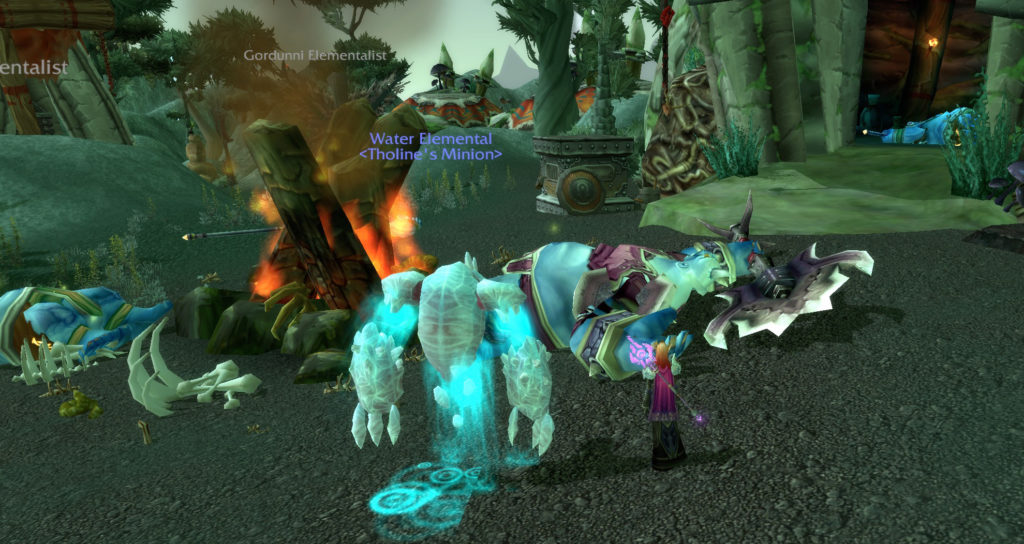 For a level 100, it’s going to be pretty easy, and gets you through your introductions to the Skyguard, and sends you on your way to Terokkar Forest.

It almost took me longer to fly to the ogres and back than it did to kill the ogres. 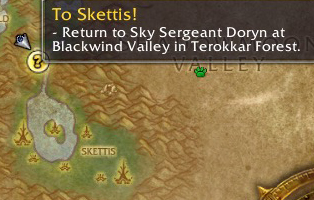 Be sure you turn on your low-level quest tracking once you’ve turned in the explosives. 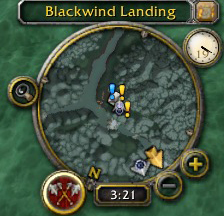 Now that you’re here, it’s a fairly straightforward grind of the dailies until you’ve filled the rep bar. You can also kill NPCs for a little bit of rep.

Something to keep in mind is if you get more Shadow Dust, hang on to it. The quest isn’t officially a daily but you are able to repeat turning in the dust.

Something to note about the dust is that AoE looting will only let you go up to 6. So be sure and stop and pick up your extra dust if you’re killing a lot all at once.

Once you turn in the shadow dust quest the guy gives you an Elixir of Shadows. Take that elixir, go kill the new shadow priest looking fellows while you have the buff, and gather up ten Time-Lost Scrolls. For every ten you can go kill a mini-boss at the skull piles (for Adversarial Blood), who will grant more rep. Once all four of the mini-bosses are dead you can summon the great Terokk on his island. If you’re lucky, he might drop Time-Lost Figurine for you, too!

A warning for doing the Fires Over Skettis quest is to not trust the map. Those big eggs are going to be all over the tops of the arakkoa buildings, not just in the designated quest area places.

Tired of going to Terokkar Forest for this grind? There are also some quests off in the Blade’s Edge Mountains. To get this unlocked you need to hit the Ogri’la folks. If you haven’t done this already, you’ll need to do the quests The Crystals and Our Boy Wants To Be A Skyguard Ranger. Once those are done the dailies will become available.

((Sidenote: this is the same bombing daily you’ll need to do during Winter Veil for the Merrymaker title.))

To most efficiently go from Neutral to Exalted you should probably kill a mix of some ground units and do the dailies. This is an intentional grind, but in the end, you’ll be rewarded with a friendly Nether Ray Fry.