Repping with Leashes – Sons of Hodir 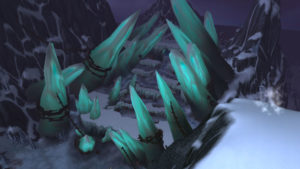 The Sons of Oh Dear — *checks notes* — sorry, the Sons of Hodir are a faction of ice giants that live in the frozen landscape of the eastern Storm Peaks, in the settlement of Dun Niffelem.

Players may first encounter them while questing for that nosy parker archaeologist Brann Bronzebeard. They will be hostile, but a quest chain that starts in the goblin outpost of K3 will allow players to get into the Sons’ good books.

The reason they’re hostile in the first place is due to Loken’s trickery, when he killed Thorim’s wife Sif, and laid the blame on the Sons of Hodir. In response, Thorim threw Krolmir, his hammer, which caused the large crater now known as Thunderfall, and gave in to despair. The Sons until then had had a good relationship with Thorim, and his apparent betrayal wounded them greatly. 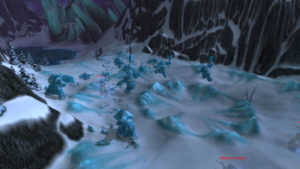 It’s only when adventurers come through that the possibility of repairing that bridge of friendship is presented.

The process of healing starts with the quest They Took Our Men!, available at level 77 from Gretchen Fizzlespark in K3. A stockpile of snacks is recommended, because this quest chain is surprisingly long. Not only is one trying to get at least neutral with the Sons, but they also have to masquerade and gain the trust of the Hyldnir, a ‘faction’ of frost vrykul warring in Thorim’s name against the Sons. The Hyldnir are a strong matriarchy, and treat females with far more respect than men, even non-Hyldnir females.

The last goblin freed in the initial quest puts the player in touch with Lok’lira the Crone, who helps them to infiltrate the Hyldnir with an illusion (what are you hiding! … sorry, couldn’t resist.) The player must compete in the challenges of the Hyldsmeet until they earn the right to ride a drake up to the Temple of Storms, where Thorim resides in his great Throne. This section of the quest chain ends with The Drakkensryd. 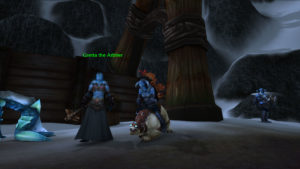 Side note: completing the Drakkensryd (a somewhat Germanic-looking word meaning ‘dragon’s ride’) unlocks the daily quest Maintaining Discipline, given by Gretta the Arbiter. She will also offer at some point three other daily quests (randomly selected from the four available). The reward, Hyldnir Spoils, has a very low chance of containing Reins of the White Polar Bear.

Now that you’ve got Thorim’s attention, the next part of the chain starts with Sibling Rivalry. After the player explains exactly what happened to Sif, Thorim wants to make amends, and sends the player out to slay the fire giant Fjorn. While doing this, an item will drop that provides the quest The Refiner’s Fire. The item is refined and returned to Thorim. 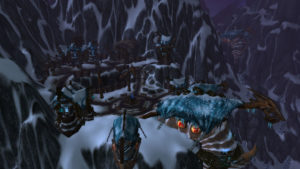 The item turns out to be what’s left of Thorim’s armour after he threw it away in his fit of despair, and asks the player to plead with the Sons to have it reforged for him. They agree, but require the player’s help in getting Fjorn’s anvil back to Dun Niffelem.

Thorim marvels at the wonderful job the Sons did on his armour, and then sends the player out to try to get his drake Veranus back. This takes a little doing, but eventually Thorim has his mount back. Now he needs one more thing — his hammer, Krolmir.

King Jokkum takes the player to the centre of Thunderfall, where Krolmir has been frozen in a block of ice to keep it out of the hands of enemies. He summons the hammer, and returns it to its owner.

Thorim asks the player to meet him up on the Terrace of the Makers, a short flight away, and is tasked with rallying the eathern defenders against Loken’s forces, and defeating his three elemental lieutenants.

At this point, it’s time for Thorim to man up and face Loken, with the player to witness. In retrospect, facing Loken on his own turf, the Temple of Wisdom, wasn’t the smartest thing to do. Loken is obviously not up for a fair fight, and cheats, disabling Thorim and his drake, and having them carried off somewhere. Then Loken reveals that he was guiding the player all along, so that Thorim would eventually be brought to him.

The King is Not Happy, and sends the player out to the Halls of Lightning, where his emissary Stormherald Eljrrin is waiting to spearhead the attack on Loken’s stronghold. A few quests are given, including one to cut out Loken’s tongue.

This pretty much concludes the main storyline, and all that is left is to do the numerous dailies on offer at Dun Niffelem. There are a number of side quests that can be picked up during the course of the chain, and these must be done as well.

There are a number of rewards available from the quartermaster Lillehoff, including a number of shoulder enchantments (bind-on-account versions are available at Exalted), a few items of armour of weaponry, two mounts at Revered and Exalted (Reins of the Ice Mammoth and Reins of the Grand Ice Mammoth, both of which award an achievement), a 22-slot bag pattern for tailors, a 32-slot mining bag pattern for leatherworkers and a jewelcrafting design. 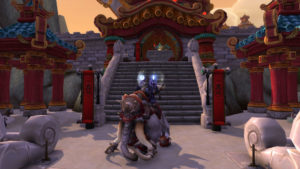 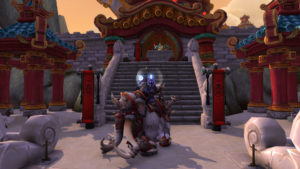