Repping with Leashes – The Saberstalkers 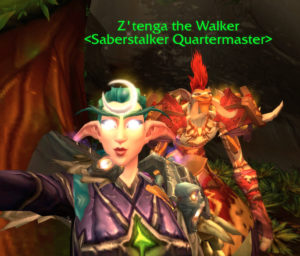 If you want to fly in Draenor, these are one of three factions you’re going to need to get to Revered.

Of the three, in my opinion, they’re one of the most straightforward, just because it involves just ‘killing all the things,’ similar to the Sha’tari Defense and Laughing Skull.

If you want to go slower, but still effectively, they offer a weekly quest that gives approximately 4000 reputation. That’s how I slowly made my way to Exalted with them.

So let’s get started! First, for Alliance, if you can’t fly, follow the road SW from Lion’s Rest. You’ll be aiming for finding the weekly quest held by Z’tenga the Walker. If you’re Horde, get near Lion’s Rest without aggroing anybody and take that same road SW. 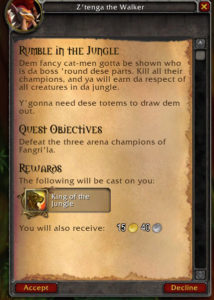 If you need reputation, personally I think it’s good to do this quest weekly and sacrifice the talon currency on the three challenge totems. 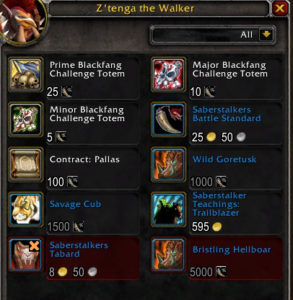 You take the three totems back up to where the map tells you to for the arena. 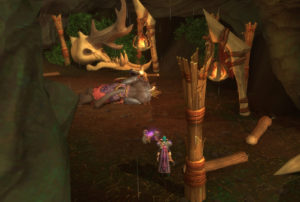 You’ll need to be patient as you drop them because you need to wait for the dead body to despawn and another few seconds before it will let you drop the next one. When you use one, it announces to the area (perhaps the subzone?) that somebody has been challenged in the arena.

This is important, because if you don’t want to spend a precious 40 talons on this quest yourself, even as I write this during 7.2.5 there are still people running around doing this quest on a Sunday morning! 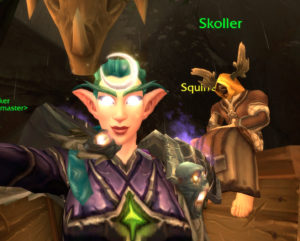 You’ll kill the guys that show up in the arena per totem, and then go back to Z’tenga to turn the quest in. To get that above screenshot I had to specially move around to not include another player, hidden behind the rocks on the left. As I summoned my victims three more players would swoop in and attack the guy, and then leave.

If this is your first time here, be sure to stop by and say hello to Skollar…

He has the item Skoller’s Bag of Squirrel Treats. It’s a cute toy that channels and tosses nuts around, bringing in a swarm of squirrels. 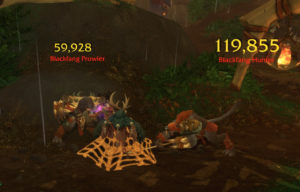 All right, so you’re at Exalted status and you want some of those nice items, especially the Savage Cub. Like I mentioned before, you’re going to have to run around this area ‘killing all the things’ for enough talons.

These guys, for a level 110, are a breeze at this point in the expansion. As a resto druid my method was switching to boomkin, flinging my two dots, and kiting them around until they died, tagging others as I went. Once they fell over, I looted. Occasionally they’d entrap me with a net, but it wasn’t anything to worry about.

I was a bit impatient with my gathering process so I opted for the ‘cheaper’ mount Wild Goretusk rather than sticking around for another 500 tokens for the cub. 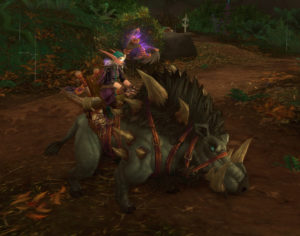 They’re very much a straightforward grind though. So if you have some time to kill it’s a fun option to slaughter these poor Saberstalkers while you wait for a queue to pop and collect their talons.

Finally, just like all of the Draenor reputations, the Saberstalkers respect the power of the Medallion of the Legion if you’re in a hurry to fly.

As we venture into Tanaan Jungle, it’s important to remember to leave treasures alone! I may have started with the Saberstalkers, but the treasures are going to be an important aspect to getting reputation with the next faction we’ll discuss.