So, Christmas is now in the past, and now thoughts turn to face the next one, so I thought I would cover that rep grind that never seems to be covered by any guide — getting Exalted with Santa Claus.

Father Christmas, Santa Claus, Saint Nick, Kris Kringle — call him what you like, but he is one of the world’s most well-known celebrities, somehow flying around the world and defying the laws of physics and time to break into people’s homes to drop off presents for good little children, and lumps of coal and that one manky cookie at the bottom of the package that no one wants to eat for the bad ones. 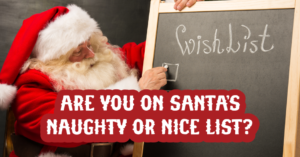 It is a well-known fact that you have to be on Santa’s Nice List(TM) in order to get gifts, but you really have to put the effort in if you want the items you’ve scrawled in crayon (or typed up on your dad’s computer) to be stuffed into your mantlepiece-mounted stocking.

It all starts at Neutral, of course. When you’re a baby, you have no idea of wrong and right, and so you can get away with pretty much anything. Somehow Santa knows this, and so he gives you the benefit of the doubt and showers you with gifts for a couple years.

Once you get to toddling around on your little feet, however, the game changes. You can now get into mischief, and you know when you’re being naughty. Santa does too, through some mysterious magic that only he knows — or CCTV cameras hidden very cleverly.

Honored isn’t that much of a big stretch to get through either. Doing chores — helping with the dishes, keeping one’s room tidy, walking the dog, etc. — will gain Santa’s approval, but any laxity will likely reduce rep gain, and may actually reverse the upward trend.

The hard work really has to be put in for getting through Revered. By the time this level is reached, you may be at an age where rumours of Santa not existing abound. Pay no attention to these rumours. He’s as real as the Easter Bunny, and far more versatile in what he gives. You really have to keep your nose clean now, getting good grades in school, not playing pranks, not bullying anyone… you get the idea. Be a nice person, do the work you’re supposed to, and you should be golden.

You can tell when you’ve hit Exalted, because your stocking (or appropriate gift box) will contain that Xbox One (or console of your choice), maybe that pony you always wanted (which will be /really/ obvious), and your parents will have a slightly pained look on their faces.

You have a whole year to work on the rep grind, but if you don’t get it next year… there’s always the one after.