Thousands of years ago, Pandaria was ruled by emperors, the last one being Shaohao. Since his passing the four ancient guardians of Pandaria, the August Celestials, have taken over the role in a sort of joint caretakership. 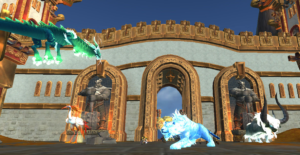 Chi-Ji the Red Crane, Niuzao the Black Ox, Xuen the White Tiger, and Yu’lon the Jade Serpent had a tough time before the Mists of Pandaria fell away to reveal the continent to the rest of the world. For thousands of years, they had been imprisoned or forced to endure in hiding while the Mogu Empire was in control. Temples were built to honour them after the Pandaren revolution which overthrew the Empire, and monks were trained in each god’s style to better protect Pandaria.

When the Horde and Alliance eventually discover this new continent, the Celestials, despite their misgivings, allow them entry into the Vale of Eternal Blossoms, seeing that even though they’re at each others’ throats, they do have some measure of goodness in them.

There is almost no way to gain reputation with the August Celestials before level 90 except through Stolen Celestial Insignia. Only the two quests given at the Temple of the White Tiger (‘A Celestial Experience’ (H)/(A) and ‘A Witness to History’ (H)/(A)) give any quest reputation before level 90.

At 90, more quests are offered, sending the players out to one of four locations each day, each of which acts as a quest hub for that Celestial. When queuing for random dungeons Pandarian dungeons (levels 80-90), players can choose to earn bonus reputation with the August Celestials by selecting on the dungeon selection window — 300 rep (or 600 if the Commendation has been applied). For the first random scenario of the day (only applicable at level 90), one gets 200 rep. 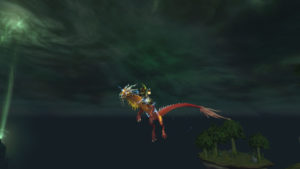 At Revered players can purchase Grand Commendation of the August Celestials for 50 gold. This will double rep gains with the faction effective immediately. They can be bought from the respective quartermasters under the terrace at either Shrine in the Vale of Eternal Blossoms, Sage Lotusbloom (H) or Sage Whiteheart (A).

Rewards can be bought from Neutral, comprising mostly a selection of cloaks, chestpieces, leggings, bracers, boots, and gloves. Three bracers enchantments are offered at Revered, and Exalted will allow the purchase of Reins of the Thundering August Cloud Serpent, as well as the tabard and Pattern: Royal Satchel.